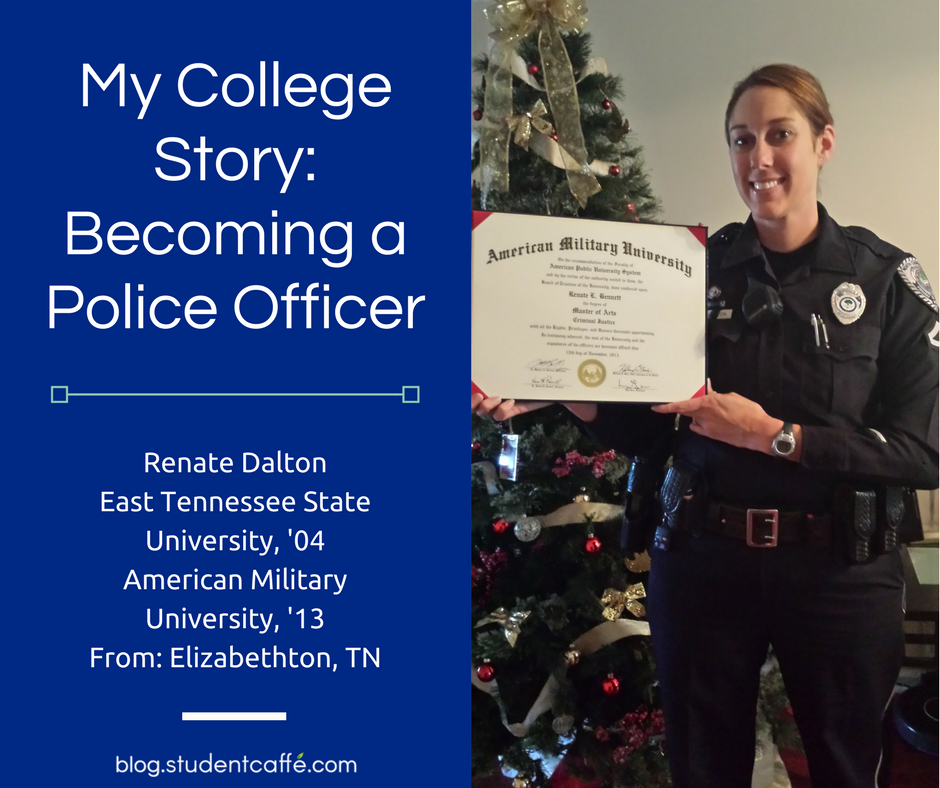 Renate Dalton attended East Tennessee State University for her undergraduate degree, where she describes her life as “rather basic: get up, go to school, go to work, study, and do it all over again the next day.” After earning a BA in political science and pre-law and a BS in criminal justice, she moved to South Carolina to begin a career as a police officer. She earned her master’s degree in criminal justice from American Military University just five years ago.

Q. Where did you grow up?

I call Elizabethton, Tennessee home because that’s where I went to high school and college. Elizabethton is an extremely small town—a total of 35,000 people in the entire county! Both of my parents were military [though], so we have lived all over the world.

Q. Did you always know you were going to go to college?

Yes, it was my ambition to go to Harvard University until I learned how hard it is to get into Harvard and how expensive it is. I was the first person in my family to go to college and it was quite the accomplishment to not only go to college, but to go on scholarship and graduate.

Q. How did you choose your college after deciding that Harvard was not an option?

Simple. I was salutatorian in my graduating class and I was awarded numerous scholarships to East Tennessee State University (ETSU).

My initial game plan was to major in political science or pre-law and continue on to law school. However, I found that my passion truly was more within the criminal justice side of law and not so much the political side. [Turns out I have] zero interest in Latin American or international politics.

Q. What was your favorite experience in college?

I absolutely loved the criminal justice program at ETSU. They have one of the most reputable programs in the United States and many of my professors from college wrote books that I used while obtaining my master’s degree. As far as extracurricular activities, I was very involved with Student Government Association, homecoming committee, and numerous organizations at school. My dearest friends, too, were all met in college.

Q. Did you study abroad? Why or why not?

No, [but] I had the opportunity to go the University of Oxford while in college. However, I had lived on my own since the age of 18 and I could not afford the trip and expenses associated with studying abroad.

Q. If you had to go back and do one thing in college differently, what would it be? Why?

I lived off campus and I wish that I would have lived on campus to get that full [college] experience. Also, if I had lived on campus I wouldn’t have had to work a full-time job to support myself and my lifestyle. Additionally, I wish that I had slowed down and gone to college for about five years rather than four so that I wouldn’t have had such a large class load; I averaged 17-21 hours of classes each semester.

Q. What is something you struggled with in college?

My overall health and well-being. I definitely found myself gaining a lot of weight due to the fact that I ate horribly and did not have the time to work out and take care of myself.

Q. What is your current career? How did you get into the field?

My current profession is law enforcement and 100% related to my degree field.

I had to do a 200-hour internship to graduate school and I completed my internship with the Elizabethton Police Department. I loved it so much and had such a passion for the field that my 200-hour internship quickly turned into almost 500 hours. After graduating from undergrad, I began working with the Department of Energy until 2008, when I moved to South Carolina. I have been a police officer for 12 years now with a total of 10 years in South Carolina.

Q. What does your day-to-day life as a police officer entail?

The cool thing about being a police officer is that no two days are the same. One day can be spent with kids playing basketball in the street and within five minutes I’m responding to a murder. I’ve seen people at their absolute best and then again at their absolute worst. I’m currently assigned to the bike team and we work a lot of special events. My job is far from mundane and if you can think of a situation I’ve dealt with it (shoplifters, homicides, bank robberies, taking kids out of an abusive home, traffic accidents with fatalities, car chases, etc.). Nothing surprises me anymore.

Q. What's one piece of advice you have for people going into your field?

Have a college degree and a fall-back plan. So many younger officers come into law enforcement gung-ho and ready for all the action. What they fail to realize is that they can be hurt in an instant and with the doctor’s signature, they can no longer be police officers. Additionally, I tell them to invest in a 401k and a 457 plan because they always need to have a secondary plan for retirement.