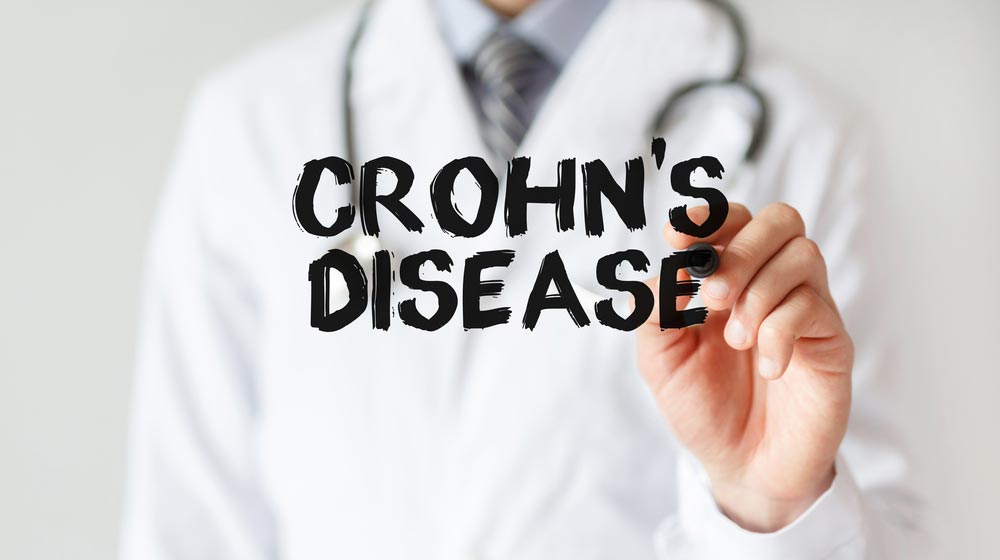 Approximately 700,000 people in the United States, both men and women, are affected by Crohn’s disease. It’s an inflammatory bowel disease (not to be confused with irritable bowel syndrome) that can cause severe abdominal pain, gastrointestinal distress, malnutrition, and weight loss. While treatment can manage Crohn’s disease, there is no cure; it is a chronic disease.

Crohn’s disease, aptly named after the doctor who first described it in 1932, can affect any part of the digestive tract, but commonly affects the last part of the small intestine and the colon. While there is the potential for Crohn’s to affect the entirety of the digestive tract, it commonly appears in patches. No one yet knows what causes Crohn’s disease, but it is possibly a combination of genetics, environment, and an individual’s immune system. It is not caused by diet or particular foods, though diet may aggravate the disease.

What are the symptoms of Crohn’s disease?

While individuals can develop Crohn’s disease at any time, it commonly starts between the ages of 15 and 35. If you experience any of the below symptoms and suspect that you might be developing Crohn’s disease, seek medical attention. Symptoms of Crohn’s disease are similar to those of other inflammatory bowel diseases and it’s important that you’re assessed by a doctor who can recommend the best treatment options.

Crohn’s disease isn’t always active; it can go into remission and cause no symptoms for periods of time. When it is active, though, it indicates that parts of the gastrointestinal tract are inflamed. Symptoms may include:

Can Crohn’s disease cause any complications?

If Crohn’s disease is severe enough, it can cause abscesses, fistulas, fissures, narrowing of the intestines, mouth ulcers, and vitamin deficiencies. Abscesses (pockets of pus and fluid) and fistulas (an opening in the intestinal wall that allows fluid to leak into another part of the intestines or into another organ or through the skin) in particular require medical attention.

During a flare up, individuals may feel exhausted and sick, making it tough to complete normal, everyday activities. When symptoms worsen or change in any way, it’s important to contact a doctor. Changing medications or treatment plans may bring relief.

How is Crohn’s disease managed?

As mentioned previously, Crohn’s disease isn’t curable. Fortunately, there are many ways that the disease and its symptoms can be managed. Depending on the severity of the illness, doctors may recommend antibiotics, aminosalicylates, corticosteroids, immune modifiers, and biologic therapies.

In worst case scenarios, such as when a section of the gastrointestinal tract (like the intestines or colon) needs to be repaired or removed, surgery may be necessary. Surgery will not prevent symptoms of Crohn’s from reappearing, but it may put a patient into remission for a number of years.

Can I go to college with Crohn’s disease?

Absolutely. There is nothing to stop you from attending college normally, especially if you’re in remission, but you’ll still want to take a few precautions when choosing an institution.

First, you want to make sure that there is a doctor (or Crohn’s disease specialist) in your college town who takes your health insurance, and you’ll want to establish yourself as a patient early on just in case your current method of treatment starts to fail. Ensuring that you have transportation is also necessary. Most colleges—even those that don’t typically permit students to have cars—will let you bring a car to campus if you have a compelling reason, but you may have to work with staff at the residential life office or the student disability center to get permission.

Whether or not you need permission to bring a car to campus, you’ll still want to make sure that the dean, student disability center, and residential life office know about your condition. Having your illness on file will help if you have to miss class due to a flare up or need to take time off for a hospital stay. Furthermore, if you want to be off the meal plan, need particular living conditions, or have other special requests, you’ll have to disclose your illness. With appropriate documentation, though, you shouldn’t have many (if any) issues.