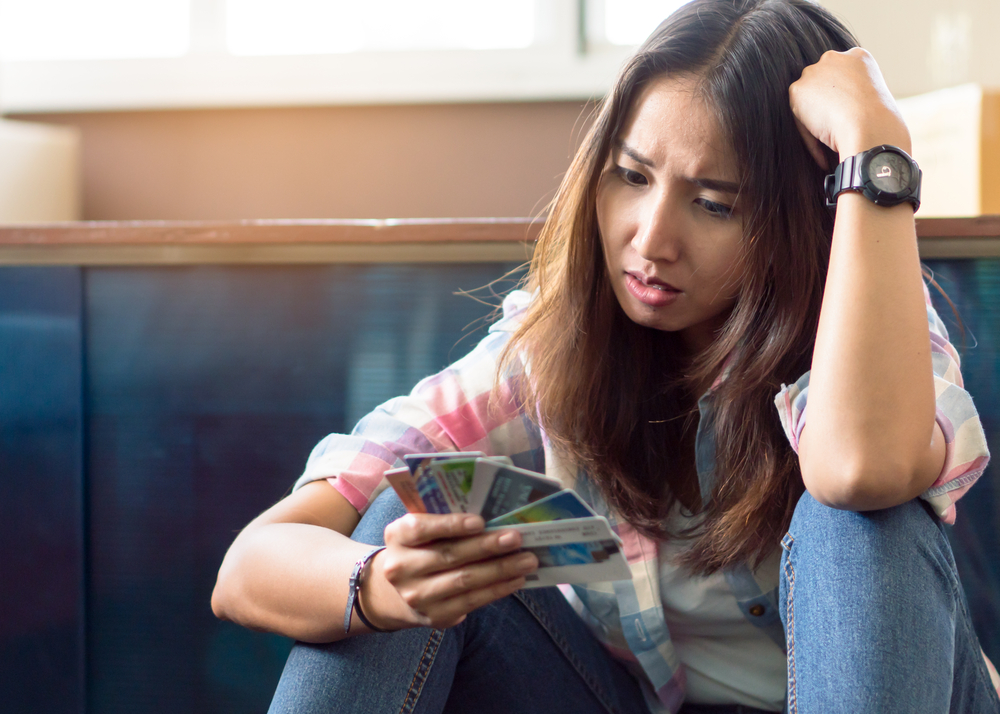 Did you know that of more than 1,200 college students with credit cards, over 44% of them were never taught how to budget, how to actually use a credit card, or many of the other intricate details of building and having a line of credit? Earlier this year, in May, U.S. News and World Report surveyed 1,427 college students (the number of respondents varied for each question) and the findings were a little scary, especially when you consider how important money and money management are to living your best life. College students are in a particularly hard spot: College isn’t cheap and most students don’t have the time to work 40 hours each week to supplement the cost. Furthermore, college students haven’t yet gotten the training to start a well-paid career and many have to take out loans to cover their tuition in the meantime. Throw not understanding how to use a credit card on top of all that, and things get messy.

As mentioned earlier, nearly half of the students who responded to the survey were taught nothing about credit cards at all. Further results showed that more than 25% of survey respondents didn’t know their own credit score, nearly 50% didn’t know the APR on their credit card or even know what APR stood for, and over 60% said that they had carried a balance on their credit card from month to month. To view more results of the survey, click here.

The U.S. News and World Report survey results are disheartening when you consider that 77% of the 50,000 people surveyed by the Federal Reserve Board in 2015 had at least one credit card. Of the thousands of survey respondents with credit cards, only 42% paid their bill in full each month. 15% also reported that they spent more money than they earned in a given year. Clearly, college students aren’t the only ones who are struggling with credit card management. With that many credit cards floating around, it seems that financial education should be on everyone’s list of priorities.

This is further emphasized by a ValuePenguin report on credit card debt. Excluding people who do not carry a balance on their cards each month (because they inherently have no credit card debt), the average household credit card debt in the U.S. is nearly $11,000. Broken down by age, ValuePenguin found that those younger than 35 averaged just over $5,800 in credit card debt (the highest amount of debt was found to belong to individuals between 45 and 54 years old). However, individuals under 35 are also less likely to have credit cards than their older counterparts and generally make less money than their older counterparts (meaning that their debt to income ratio is much higher). While $11,000 may seem like nothing for a middle-aged CEO who makes $500,000 annually (a mere 2.2% of their income), $5,800 in debt is quite overwhelming for a millennial who only makes $40,000 each year (14.5% of their income).

Without the skills to manage your finances and responsibly use a credit card, you could be setting yourself up for financial failure. I’m not just talking about your bank accounts being low in funds, but about your credit score being too low to serve you well.

Now for your first lesson: Debt isn’t necessarily a bad thing. In fact, some debt can actually be good and help you grow your credit score. However, you have to manage your debt well for it to benefit you. Your credit score is dependent on, among other things, how much debt you have and your payment history. If you have some debt, but you always make payments on time, it won’t affect your credit score too adversely, and it might actually raise it. If you have debt and fail to make payments on time, however, your score will drop. Having a low credit score (think: closer to 300 than to 850) will make it hard for you to open new credit cards, qualify for loans, rent an apartment, or qualify for low insurance rates. If you are already in debt, the best thing you can do for your credit score is make on time payments. This goes for your rent, utilities, and other bills as well.

For your second lesson: Interest is usually a bad thing. Preferably, your on time payments will also be for amounts greater than the minimum payment. Your credit card will have a specific APR (annual percentage rate), which is the amount that you will have to pay in interest if you pay less than the total balance of what’s due each month. “Best Student Credit Cards of 2017” by U.S. News and World Report explains how APRs are set:

“Credit card issuers commonly set their card APRs as a function of the federal prime rate. Your credit card’s terms and conditions statement, for example, will commonly express your APR as ‘U.S. prime rate plus 16.99 percent.’ Since the current federal prime rate is 4 percent, that would equal an APR of 20.99 percent for any purchases not paid off by the end of the grace period. Therefore, when federal interest rates rise, your credit card interest rate usually rises too.”

Interest, while excellent for your savings account, is something you really want to avoid when you’re the one paying it. If you elect to pay off less than the total balance of your credit card each month, the amount due will begin to accrue interest (the sum of which depends on your APR). If you have a low credit score, your interest rate will be higher (read: worse) than if you have a high credit score. With interest rates as high as 23%, you’ll be paying quite a lot for the privilege of using your credit card. “Best Student Credit Cards of 2017” makes this extremely clear:

These two lessons, while they may seem obvious, are the key to starting your credit card game strong. Knowing that your credit score (and much of your financial future) is based on your ability to make on time payments and pay down your debt (more than just the minimum payment) will save you a headache. It will also save you a bundle of money! If you’re looking for more information for credit card beginners, browsing for a student-friendly card, or just want to understand the jargon, U.S. News and World Report’s article “Best Student Credit Cards of 2017” is exceptionally thorough and has the answer to anything you could think to ask. If you’re just looking for a short article full of tips, try this one of ours!