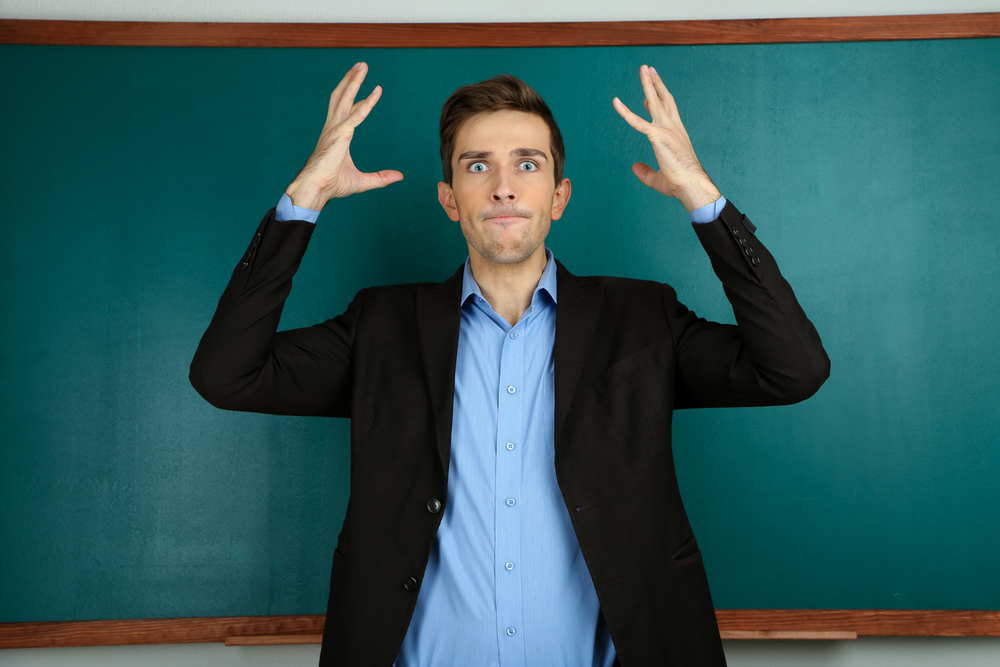 It can be distressing to think that a classmate doesn’t like you or that one of your friends isn’t as into your friendship as you are. It’s even more distressing to think that a teacher doesn’t like you or doesn’t want you to do well in their class, but it’s not an uncommon feeling. Both mutual and one-sided dislike are unfortunately a part of being human. You’ve likely experienced the end of friendships, the end of relationships, and any number of falling-outs over the course of your lifetime, but this could be the first time you’ve felt a teacher’s wrath.

When you’re young, it can happen for no reason at all. Maybe John didn’t invite you to his fifth birthday party, so you decided not to like him anymore. Or maybe Linda was best friends with Sarah instead of you, which hurt your feelings enough to make you stop being friends with both of them. Sometimes these things happen for no reason at all; someone might rub you the wrong way without you ever having interacted together. There are certainly people I’ve judged before getting to know them, but once I made an effort, it turned out that my gut feeling was wrong; this is a lesson that is taught in the movie Shrek, too. To err is to be human (or ogre), but when it starts affecting other people, behaviors need to change.

Often, thinking that a teacher hates you or is out to get you is actually the result of annoyance. If you feel like you are being personally victimized, whether you’re in high school or college, your first step should be to take a look at your own behaviors. If you think your teacher gives you the evil eye, ask yourself these questions:

If your behaviors leave something to be desired, you have every opportunity to fix them on your own. Likely, being respectful of the classroom and of your teacher will be enough to turn their bad opinion of you into a good one. Here’s an example. When I was a sophomore in high school, I signed up for AP World History, despite the fact that I hated history and most definitely didn’t belong in a history course at that level. I sat at the same table as a girlfriend of mine and we got into the habit of drawing caricatures of our classmates. Inevitably we would wind up in fits of giggles, which were super obvious to the entire class and, of course, our teacher. His first (very wise) move was to separate us. I ended up by a window and she was put closer to the door. It didn’t stop us from drawing the cartoons though. His next move was to make the entire class write an essay. That pretty much shut us up for good. I can’t say that he ever much liked either of us after that (and the whole class was pretty upset with us too), but we developed a mutual understanding: If we stayed quiet, no one would suffer. My teacher may not have ended the year with me on his good side, but I respected him after those first incidents, and he returned my respect. (And, in case you’re wondering, I did not pass that AP exam.)

If you’ve done some self-reflection, though, and don’t believe that your behavior is to blame, consider your grades. If your homework and tests show little effort and your grades are less than stellar, it is possible that your teacher has lost some respect for you because you seem uncommitted to the class. If you’re worried that your teacher’s perceived dislike of you is resulting in your grades being docked, you need to have a conversation. Stay late after class or visit during office hours and ask if your teacher would mind revisiting the rubric and reviewing the assignment(s) in question with you. Knowing where you’re losing points could help you understand your grades better and learn how to turn them around. It’s unlikely your teacher is vindictive enough to arbitrarily lower your grade (though anything is possible).

When it comes to grades, you also have to recognize that your teacher can use a variety of methods to calculate them that may or may not be detailed in your class rubric. My best friend and I took the same geology class one semester and had numerical grades that, according to the rubric, should both be A minuses. When grades came out though, my friend ended up with an A- and I was given a B+. I confronted my professor about it (after a cooling off period) and was told that the rubric was wrong; he’d decided to grade on a bell curve instead. Despite having an A- numerically, he assigned me a lower grade because he wanted a normal distribution. It was my first college lesson in “life’s not fair.” All you can do is give it your best; your teacher will recognize when you’re making an effort.

If it’s not your behavior or your grades, you could talk to your teacher one-on-one and ask what’s up. While it is unlikely to be a very easy or particularly comfortable conversation, it does need to be a mature one. It’s unwise to go in with a combative or angry attitude. Instead of framing the conversation like this: “I’ve noticed you hate me and I don’t know what’s up with you,” try: “I am trying my hardest to be a good student, but I think I’m falling short. Is there anything else I can do to improve my standing?” or “I feel like I may have offended you in some way. Would you mind talking about it?” An accusatory attitude isn’t going to help anyone and could make the situation worse. While your teacher may not admit to any wrongdoing, you may find that a frank conversation leads to an improved relationship over time. If it doesn’t, you could consider reaching out to your counselor, the head of the department in question, or the dean of students.

All humans are guilty of making snap judgments. You may feel that your teacher is giving you bad vibes, but it could be that you remind them of an ex-partner or an old friend with whom they’re no longer in touch. It's entirely possible that you've personally done nothing wrong. Do your best to be respectful of your teachers and that respect will likely be returned to you. Pay attention, go into the classroom wanting to learn, and make an effort. It will pay off in your relationship with your teacher (letters of recommendation, anyone?) and in your grades.

Note: If you feel that your teacher is actively discriminating against you or is behaving inappropriately (sexually or otherwise), you should seek out a superior immediately. There are laws in place to protect students, and it is never okay for a teacher to treat you in a way that makes you feel unsafe. Your guidance counselor, school principal, parent, academic advisor, or the dean of students will be able to help you.