Home » Lifestyle » Housing » How to Deal with Noisy Neighbors in College 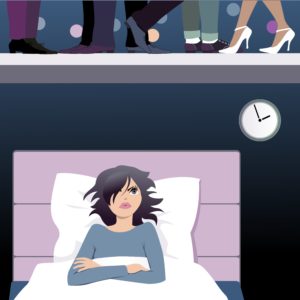 We’ve told you how to be a decent roommate, but we haven’t given you much advice about what to do if your neighbors, be they next door, across the hall, above you, or below you, are the problem. If you live in the college dorms, the most common complaint you’ll hear is “My neighbor is being too loud.” Whether they’re loudly listening to music with their door wide open, having a party above your bedroom, slamming their door at all hours, or singing karaoke-style in the shower, excessive noise when you’re trying to study or sleep is highly obnoxious.

I’ve been there, trust me. There was a period during my junior year when I frequently stood on my desk and banged a broom against the ceiling to try to get my upstairs neighbors to keep it down. When that didn’t work, I tried sleeping with earplugs. I also tried sleeping with a pillow over my head. I ended up becoming that really cranky girl who called my RA because the noise made it impossible for me to fall asleep on the night before a test. As you can tell, I really covet my sleep. And you should too: the National Sleep Foundation recommends that college students and young adults get between seven and nine hours of sleep each night, but states that six to 11 hours may be appropriate for some individuals. What do you do, though, if your loud neighbors prevent you from sleeping?

I wouldn’t recommend that you go straight to banging a broom on the ceiling; people are apt to think you’ve lost your marbles and are channeling your great-great-grandma (or that you watch too much TV). Plus, it’s not that effective. Instead, the first thing you should do is look at the clock. If it’s 7:00 p.m. on any day of the week, there’s not much that you can do. Most dorms have quiet hours (earlier on weekdays than on weekends), but these generally don’t start until after dinner or around bedtime (think 10:00 p.m on weekdays and 1:00 a.m. on weekends). You could ask your neighbors (nicely!) to keep it down if it’s before quiet hours start, but you can also take steps to block the sound out yourself:

If sleep is your main concern, the above techniques may only help a little, or not at all. I’d imagine it’s next to impossible to fall asleep with noise-canceling headphones on, and closing your door isn’t going to do much if the problem stems from your upstairs neighbors. Earplugs can be uncomfortable, but they’re definitely worth a shot. You could also try:

If you feel like you’ve tried everything and still aren’t having any luck blocking out your noisy neighbors, you have a few more drastic options. If you attend a small college, chances are you know your neighbors, or have at least seen them around. You could always try talking to them, letting them know that you’re having trouble sleeping or studying in your room, and asking if they’ll try to keep the volume down in the future. Obviously, this is something that you can do even if you don’t really know your neighbors, it just makes it that much more uncomfortable. 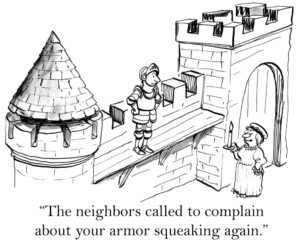 If you plan on confronting your neighbors, you need to do it nicely. Be respectful, don’t blame them, and don’t play the victim. Instead of saying “Your music is so disruptive, I can’t sleep,” try something like “Hey guys, would you mind turning your music down a few notches? I’m trying to sleep just downstairs.” Generally, people don’t know how loud they’re being and are happy to tone it down. A friendly, direct approach may solve the problem entirely. However, being rude or passive-aggressive (leaving a note on their door, for example) is unlikely to result in the desired outcome.

If it’s after quiet hours start on a weekday and you’ve tried talking to your neighbors, but the sound persists, it’s probably time to talk to your RA. While it can feel uncomfortable and seem like you’re a tattletale, there’s nothing to worry about. Your RA is an authority figure and has been trained to deal with problems like this. It is their job. Just explain to your RA that while you’ve tried to talk to them on your own, your neighbors are being noisy and keeping you up or preventing you from studying. Afterwards, your RA will pay the neighbors in question a visit. In some cases, your name and complaint won’t even be brought up, since it is part of an RA’s job to maintain order on the floor. You could be mentioned, though, so be prepared for that possibility. It may lead to a chilly relationship between you and your noisy neighbors, but there’s not much left for you to do. With any luck, you can avoid living near them again next year.

If things are really, really bad, your last option is to call campus security. I really don’t advocate for this, because in-house discussions tend to lead to better resolutions, but if it’s 4:00 a.m., you’ve asked for quiet, and your RA has asked for quiet, you don’t have many other options. A visit from campus security is the quickest and most efficient way to shut down an after-hours party, but it will likely lead to some resentment. If you haven’t exhausted all your other options, do so first, and in the future, request a room on a quiet floor so you don’t have to worry about anyone else making noise.