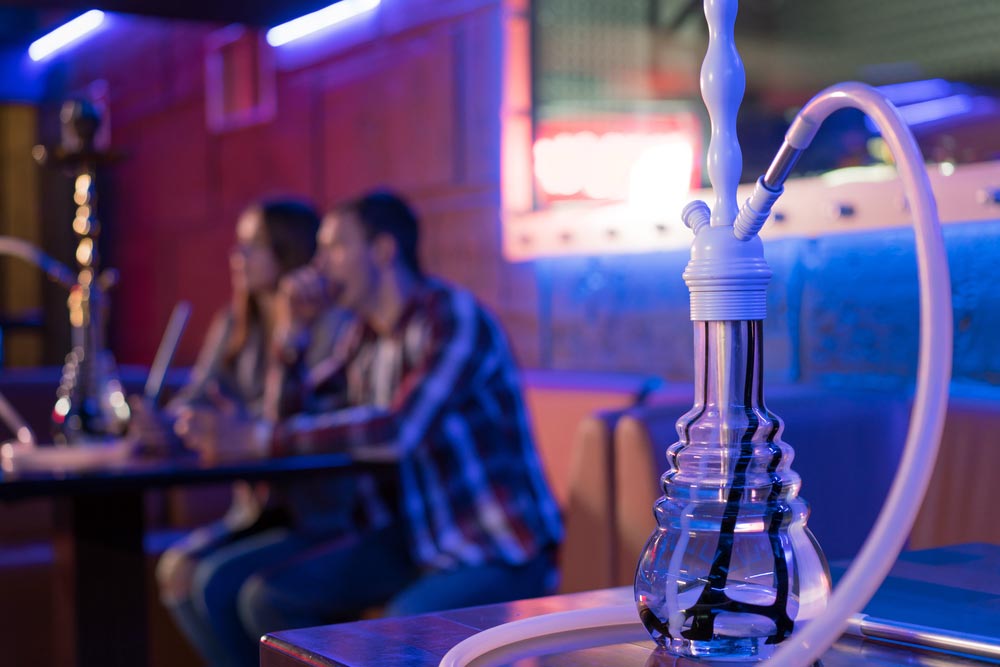 The Health Risks of Hookah

A hookah is a water pipe, common in the Middle East and India, that allows users to smoke tobacco. It’s base is filled with water, while the top plate or bowl is filled with flavored tobacco. The tobacco is heated and smoke is drawn down though the water to a hose connected to a mouthpiece. This is passed around between users, as smoking hookah is generally a social activity. Since the tobacco that is used is flavored or sweetened (flavor options are nearly endless, from chocolate to apple to coffee), users don’t taste the smokey flavor that comes with other forms of tobacco use.

Many people believe that the water in a hookah filters out the harmful ingredients present in tobacco smoke. Unfortunately, this isn’t the case. Smoking hookah is no safer than smoking cigarettes. In fact, by smoking hookah, you may actually be putting yourself at a higher risk than by smoking a cigarette: hookah smoke contains tar, carbon monoxide, and carcinogens, all things that you don’t want building up in your lungs, in much higher quantities than a single cigarette. And since hookah is an inherently social activity, you may actually spend longer inhaling toxic compounds than you would smoking a cigarette...or five.

A study published by the American Association for Cancer Research in 2014 found that after a single night of smoking hookah, internal nicotine content (as measured in an individual’s urine) spiked to an average of 73 times higher than before smoking began. NNAL (a cancer-causing chemical formed after tobacco enters the body) levels doubled, and products resulting from the breakdown volatile organic compounds increased up to 91%. Long-term or repeated use of tobacco products is known to cause various types of cancer (oral, lung, stomach, bladder, etc.), heart disease, and respiratory illness. Let’s not forget that mouthpieces are shared among participants, so any diseases that be can transmitted through saliva, from the common cold to oral herpes, can be passed from participant to participant too.

The fact of the matter is that tobacco is tobacco, no matter how you take it in. There is nicotine in all forms of tobacco, making smoking hookah just as addictive as smoking cigarettes or using smokeless tobacco. All forms of tobacco increase your risk of developing cancer, heart disease, and respiratory illness. If you are addicted to tobacco products and want to quit, there are programs and techniques that can help you. Ask your doctor for advice about quitting, call 1-800-QUIT-NOW (1-800-784-8669), or visit smokefree.gov. Quitting is hard, but the health benefits are worth it, now and in the future.

The Health Risks of E-Cigarettes

Unlike hookah and traditional cigarettes, e-cigarettes do not actually contain any tobacco. Instead, they contain a liquid mixture of nicotine, flavoring, and other chemicals (exactly what’s inside an e-cigarette varies by brand). Similar to a hookah, individuals who use e-cigarettes inhale the steam that is created when the mixture inside the e-cigarette is heated. However, there is no tar or carbon monoxide, or any tobacco-related carcinogens. What there could be, though, are toxic compounds that aren’t related to tobacco, including formaldehyde and diacetyl (which can cause lung disease). While touted as a safer alternative to cigarettes or tobacco products, there are still health risks.

The predominant problem with e-cigarettes is that they continue to facilitate nicotine addiction. Some people switch to e-cigarettes in an attempt to smoke “healthier” cigarettes or as a step on the way to quitting smoking altogether. As you might expect, switching to e-cigarettes does not help individuals to quit smoking; a review of multiple studies found that individuals who used e-cigarettes were 28% less likely to successfully quit smoking than those who didn’t, likely because e-cigarettes provided a continuous source of nicotine.

Nicotine isn’t particularly healthy either. It causes problems of its own, including:

If you are curious about e-cigarettes, but have never smoked before, don’t start now. The potential for addiction is too great, and the side effects aren’t worth the risk. If you currently smoke e-cigarettes, but want to stop, talk to your doctor about quitting. It is possible!