Home » Lifestyle » Health and Wellness » The Relationship between Depression, Suicide, and the Military

A study completed in 2012 found that 12.0% of currently deployed, 13.1% of previously deployed, and 5.7% of never deployed members of the military suffer from major depression. Female soldiers, as well as those who are unmarried, enlisted, younger than 25 years old, and those who haven’t completed college are more likely to exhibit depression. In the United States as a whole, only 6.7% of individuals (mostly women) suffer from major depression. The military, then, is a risk factor in and of itself, as depression is more common in members of the military than in the general public. 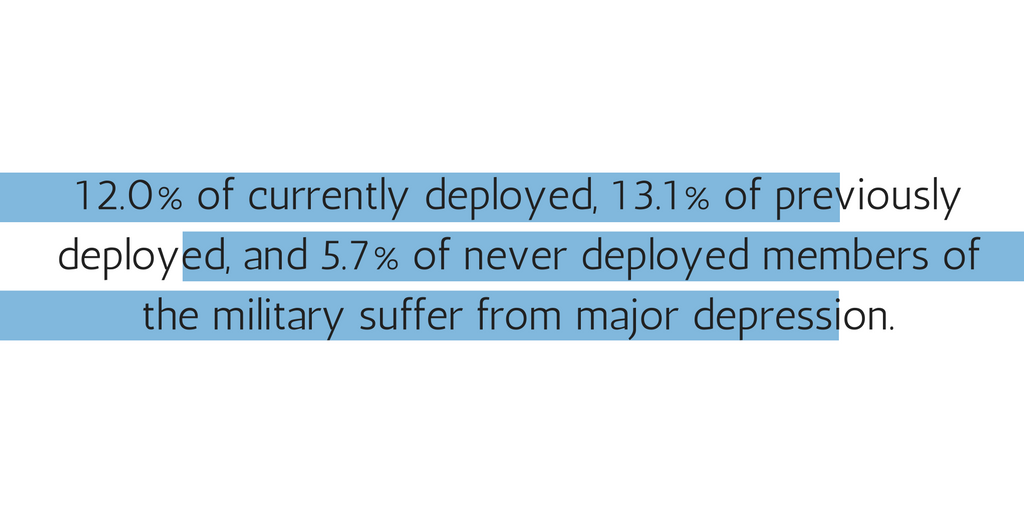 Major depressive disorder is more than just feeling down for a day or two. In fact, to be diagnosed with major depression, an individual must exhibit at least five of the following symptoms at a time, for at least two weeks: 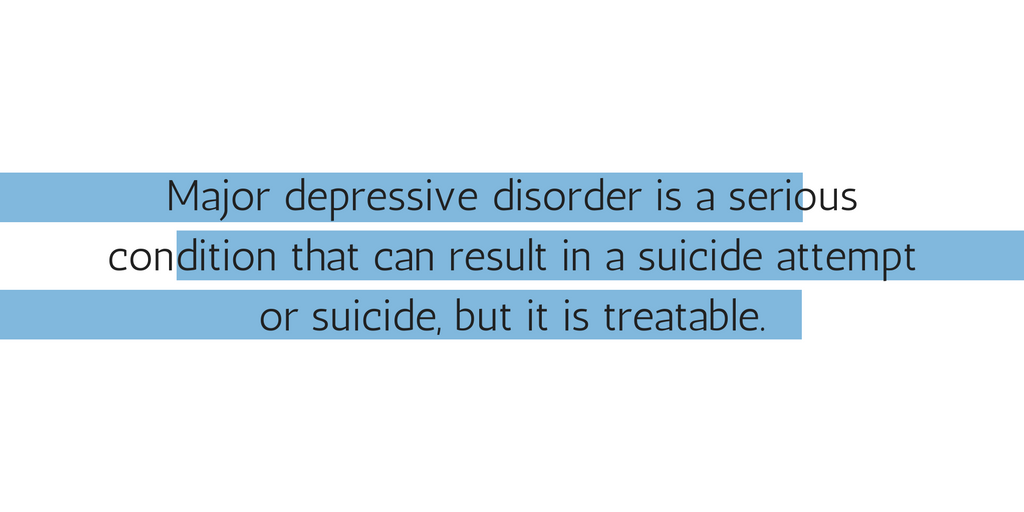 While depressive episodes may be long lasting and debilitating, they are not always recurring. Some people may experience one in their lifetimes, while others may experience many. Contact your primary care doctor, visit your campus health clinic or military behavioral health specialist, or make an appointment at the VA if you’ve been experiencing these symptoms. Major depressive disorder is a serious condition that can result in a suicide attempt or suicide, but it is treatable. 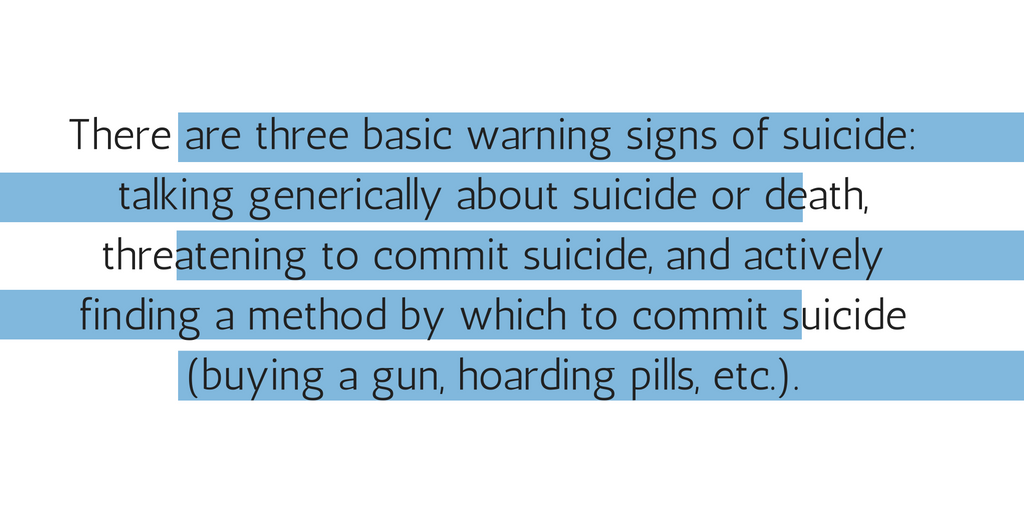 There are three basic warning signs of suicide: talking generically about suicide or death, threatening to commit suicide, and actively finding a method by which to commit suicide (buying a gun, hoarding pills, etc.). In the military, suicidal thoughts are more frequent in young, unmarried males with low ranks and in individuals who have recently returned from deployment (especially after an injury). Other contributing factors may include regular, heavy drinking and not getting promoted when expected.

If you or someone you love is exhibiting any warning signs of suicide, seek help immediately. Call emergency services or one of the 24-hour helplines listed below. If you are worried about a friend, remove anything with which they could try to commit suicide, bring them to a safe place, and do not leave them alone until help arrives. 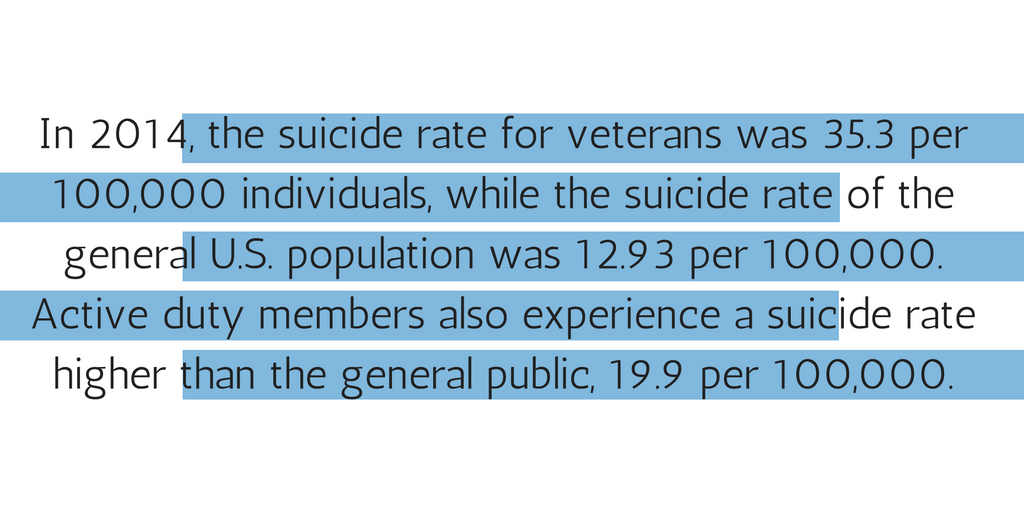 In 2014, 20 military veterans committed suicide each day and accounted for 18% of all deaths by suicide in the United States. In 2014, the suicide rate for veterans was 35.3 per 100,000 individuals, while the suicide rate of the general U.S. population was 12.93 per 100,000. So again, a history with the military leads to an increased risk of suicide over nonveterans. Veterans commit suicide more often in the three years immediately following their transition to civilian life than later on, but active duty members also experience a suicide rate higher than the general public (19.9 per 100,000).

While there is no one single reason behind higher suicide rates for current and former members of the military, service members are more likely to experience Post-Traumatic Stress Disorder, which can lead to depression and therefore suicidal thoughts. 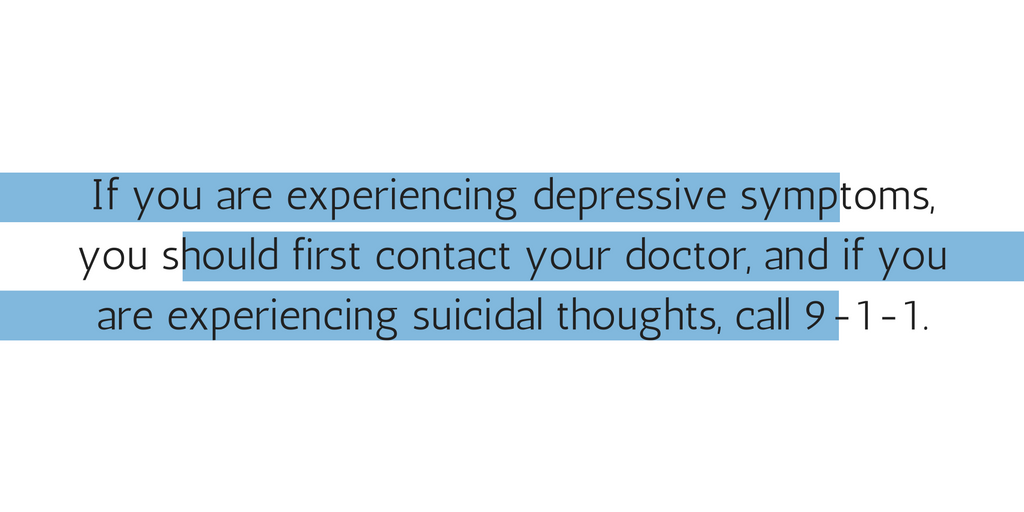 If you are experiencing depressive symptoms, you should first contact your doctor, and if you are experiencing suicidal thoughts, call 9-1-1. Otherwise, there are some ways to alleviate the symptoms of depression. Consider journaling to express your emotions and understand how they change over time. Make an effort to hang out with your friends, classmates, or coworkers. Make yourself work out regularly (this releases endorphins), keep to a normal sleep schedule, and try to maintain a healthy diet. Depression is a treatable illness, and with support from your campus, family, and medical specialists, you can get through this.