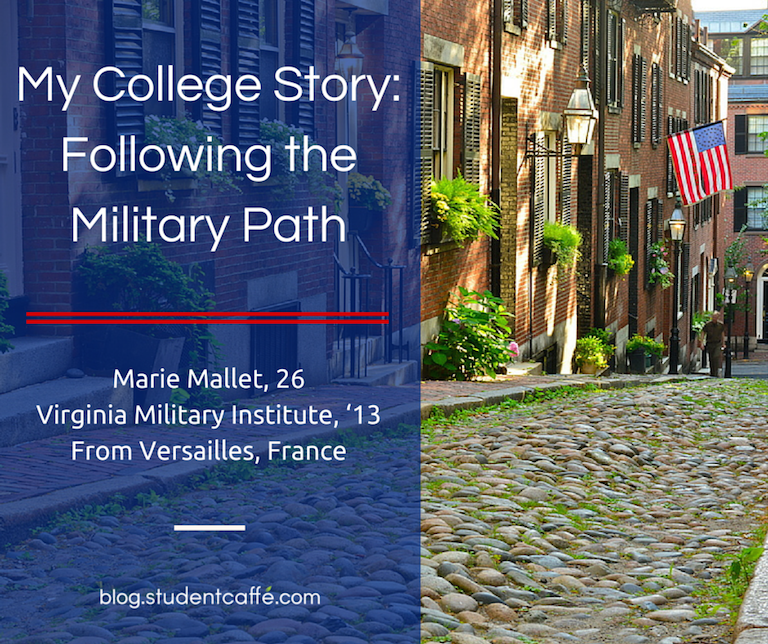 Marie Mallet comes from a military background, so it was no surprise that she wanted to follow in the footsteps of her parents and join the Army herself after spending four years at a senior military college. She graduated from Virginia Military Institute in 2013 with a bachelor’s degree in modern languages and cultures, with an emphasis on French and Spanish, after which she immediately accepted a commission and began to serve on active duty. She is now a first lieutenant in the U.S. Army stationed at Ft. Hood, TX, but she was previously stationed in Korea.

Q. Where are you from?

I’m originally from France; I was born and raised there. My father was a French Army officer, so I grew up around the world, wherever he was stationed. I came to the United States in August 2008 after graduating French high school so I could attend college in Virginia. In 2011, after my father retired, my family moved to Blacksburg, VA.

Q. What made you decide to attend a senior military college and accept a commission?

I attended a French military high school with the intention of following in my father’s footsteps; however, the French Army wanted science majors, and I was liberal arts. My mother, who was an American Army officer, suggested I apply to American colleges and try to commission here, which I did after receiving a four-year Army scholarship.

I come from a very large military family, and my parents were my role models. I grew up with the desire to serve my country, either of them, and could not imagine having a job to make money for a corporation; I wanted to feel like I was working to help the greater good. A senior military college seemed to be the best preparation for that kind of future.

Q. What did you like about your educational experience? What was hard?

Attending VMI was the biggest challenge in my life. It was very hard, and I thought about quitting on a daily basis during our rat line (August to February); however, when life is so difficult, you really learn to rely on others. I quickly found out that people don’t get through their first six months on their own—you really have to be a team player. Kimberley Gragg, my roommate of four years, was my rock, and today we still talk about how being there for one another is what got us through those long four years. Neither of us think we would have made it so successfully without the other. Those who thought they were too good for the team didn’t last long.

VMI also taught me the importance of professionalism. We were not students; we were cadets. I didn’t know what I was really capable of until I attended this tough school. VMI pushes you to a point you think is your breaking point, but when you make it through, the sense of pride is priceless.

Q. What do you think you got out of your education that you wouldn't have gotten at a "traditional" college?

VMI is a relatively small school. We had small classrooms, giving us each more one-on-one time with the teachers. Academically, I truly believe that the professors had a lot more interest in our success than those at regular schools. On the military side, the strict daily schedules taught me to be more efficient with my time, as well as make what would seem high standards of living a norm. We didn’t have the opportunity to skip classes or stay out all night. Our rooms were inspected daily, and being late was never an option. Now, I still live that way, whereas if I had gone to a civilian school, I might think that all that would be a little much to ask for.

Q. What advice do you have to high school students who are considering attending a military college or joining an ROTC program?

Many college have ROTC programs, and very good ones. There are so many scholarships and opportunities (I went to Taiwan with a group from several colleges); however, for those who don’t attend a senior military college, the military life is only for a couple of hours a week. I think that if you intend to make a career out of the military, these tough schools are the best preparation you can get. Not only are you guaranteed active duty, but you really get a taste of the demands you will face after commissioning. You learn how to present yourself, how to be punctual and professional, and all of this becomes standard and eventually becomes natural.

Q. What was it like transitioning from a school environment into active service?

After graduation and commissioning, there was definitely an adjustment period. There were a number of restrictions at VMI, and from one day to the next, I was on my own with more freedom than I knew what to do with. I was not surprised, shocked, or lost when I got to Korea for my first duty station, though. VMI had prepared me to be a hard worker, and minimum standards were not enough. I was able to jump right in, work long hours, and be successful in all my missions.

Q. What do you hope to experience in the future of your military career?

As of now I have been a logistician, but I am currently getting my master’s in psychology to become a military psychologist. I intend to stay in the Army as long as I am permitted to. I cannot imagine doing anything else with my life.

Q. Have you found that it is more challenging to be a woman in the military than a man? If yes, in what way?

Although not always, yes. I think being a woman in the Army is a little more difficult than it is for men. My very first commander commented on women not being as qualified as men shortly after I joined the unit, so I knew from the very beginning of my career that I would have to fight to be heard and I would have to prove myself on a regular basis.

In logistics, men and women do the same work, so I don’t feel that kind of discrimination on a regular basis, but I know that for the woman who are joining the combat arms, it’s a different story, and they constantly have to prove they deserve to be there.

Q. What is your favorite memory of your time in the service, whether it was at school or after graduation?

My best memories are from the day I commissioned and the day I left Korea. On my commissioning day I was obviously very excited, but it felt amazing to finally pin those officer bars that I had been working on since I had joined French military school when I was 15. Making it through all four years at VMI was an accomplishment that I often thought I would never be able to complete, and the pride was overwhelming.

Leaving Korea itself wasn’t the happy day, but I had spent 11 months as the distribution platoon leader for an aviation battalion with a lot of ups and downs. Although all of my missions were successful, I was always terrified to make mistakes. But before I left, my platoon got me a plaque to remember them by and gave the most heartwarming speech I have heard in my career. My commander rated me, but my soldiers were the ones who showed me I had been successful at my job.

Q. What's your favorite way to celebrate the Fourth of July?

My favorite way to spend the Fourth of July is with the people who chose the same vocation as I did. My husband, who is an infantry captain, and my close friends I made in Korea, who are all service members, are the ones who really make me feel like I belong. Spending time with the people who understand—even without asking—why I chose this job reminds me of all those who have given their lives, or those who are willing to do so for the same reasons I am.