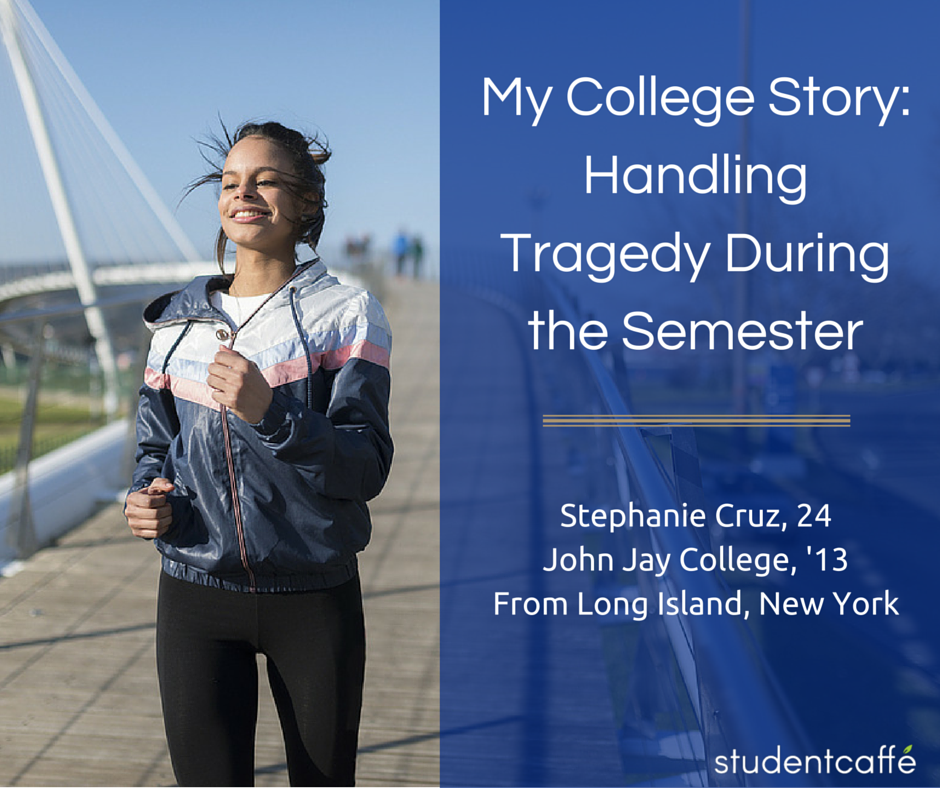 Stephanie Cruz graduated from John Jay College of Criminal Justice with a B.A. and a double minor. She comes from a close-knit Dominican family and grew up on Long Island. John Jay was the right college for her because of its location, subjects of study, and total undergraduate enrollment of 13,305.

Stephanie had always worked hard for everything she achieved, but a tragic accident made persevering even more challenging. Obstacles arose and were met with more obstacles. Today, she shares her story in the hopes of inspiring other students to reach their goals even if the path gets rocky.

I am 24 years old. I have my B.A. in criminal justice with a double minor, one in corrections and the other in law. I work as a corrections officer.

Q. You grew up on Long Island and attended John Jay in New York City right out of high school. Tell us about how you chose your housing arrangement.

My college housing arrangement came to me simpler than most. Most of my family lives in Manhattan, so I decided to stay with a cousin of mine. It saved me a lot of travel time and money on housing.

Q. At one time, in the midst of a challenging semester, you faced a tragedy. Can you tell us about it?

In September of my junior year, I received a call from my mother around midnight. My brother had been in a serious car accident. I immediately left school and made my way home to Long Island, missing the rest of my classes that week.

Q. For students, getting back to school after a tragedy is challenging. What happened when you returned to your classes?

That week, I had a math test, so I emailed my professor prior to the date of the exam explaining that I would be not be coming in. I asked if it would be possible to reschedule, but he never answered. When I arrived back to school several days later, I approached my math professor with the documentation showing that my brother was hospitalized. My math professor told me that I couldn't make it up, regardless of the scenario, and that I would have to take a 0 for that exam. He continued to state that hopefully I would do well on the other two exams and that the lowest grade would be dropped.

Q. That’s not what most of us expect from professors who are supposed to facilitate student success. How did you handle your professor telling you to take a 0?

I questioned my professor. I wanted to know why I couldn't take the exam despite my legitimate reason and the proof I was showing him. When I realized there was no way to get the professor to change his mind, I became angered by the situation and began saying how dumb it was. That night, once I got home, I withdrew from the class.

Q. What were the benefits of dropping the class?

The benefit that I felt after dropping the class was a sense of relief. Math has always been my worst subject, so going into a semester with a 0 on a exam was such a big hit. I don't think I would have had any motivation or drive to work hard to pass the class. At that point, my feelings toward the professor were involved. I feel like if I had stayed in the class and failed the next exam, I would have hurt my GPA and wasted that tuition money. Withdrawing didn’t have those consequences.

Q. What were the repercussions of the withdrawal?

The main repercussion of my decision to withdraw from my math class was that I had to wait another semester before I could register for another math class that was required for my degree. I was a little behind in credits. Due to that, I had to work twice as hard and double up on classes during my senior year just so I could graduate on time, which I did.

Q. If you could go back, what would you do differently?

I’m not sure I would do anything differently. My brother ended up being hospitalized for about two weeks and had physical therapy for weeks after that. Between that, making time to travel back and forth, and juggling my schoolwork, I was all over the place. I was going through a lot and truly believe that there was no way I could have overcome that 0 on my exam.

Q. What advice would you give to others in a similar position?

Follow your gut feeling. At the end of the day, the best way to maintain your well-being in a stressful time is to feel comfortable with your decisions. With that being said, everyone is unique and overcomes challenges in different ways. If you feel that the challenge that you face is something that you can defeat or work hard to accomplish, then go for it.