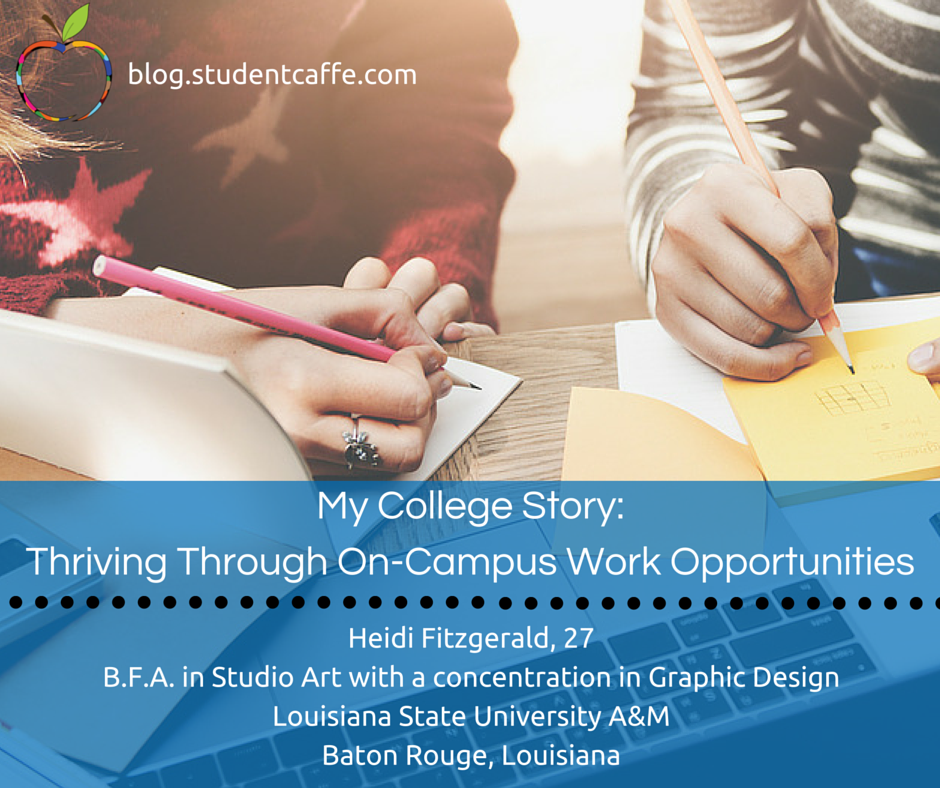 Heidi Fitzgerald studied studio art and graphic design at Louisiana State University and Agricultural and Mechanical College, graduating in 2010 with her Bachelor of Fine Arts degree. While at school, Heidi participated in the honors program and volunteered on campus. She worked as an RA in the dorms for the last two years of college and as a web designer following graduation. Now she works as the website designer and administrator for Student Caffé.

I was a member of the LSU Honors College and Volunteer LSU, both of which gave me unique opportunities to build a better working relationship with faculty members and the campus community. I also served as a member of my residence hall’s student council (and by extension, the Residence Hall Association). Later, I worked as a resident assistant. Being involved in my community really helped me come out of my shell and become a more outgoing person.

I am currently the website designer and administrator for Student Caffé. Before this, I did freelance design work—standard design and website design—for several years in different industries. I have worked with the CEO previously, assisting his in-house set designer with other projects, so I was more than happy to add my application to the pool when I heard that there was a position open for a new and exciting project.

Q. What was your greatest challenge throughout college and how did you overcome it?

I wasn’t very outgoing when I first got to college, even though I lived on campus and was constantly around other people. While I made some lifelong friends, I wasn’t as active in the campus community as I could have been. I loved living on campus, though, and I loved the idea of being able to work on campus while helping others out, so I applied to become an RA after my first year of college. My application was rejected because I wasn’t involved enough in my local campus community. During my next academic year, I ran for a vice president position on my residence hall’s community council and joined other campus organizations.

When RA applications opened up that year, I applied again. With my new history of running programs, budgeting hall funds, and just being more involved in the community and better with people in general, I got the job. By the end of my senior year, not only had I managed to keep my position as an RA during the reapplication process, but I was voted by my peers as the campus-wide Best Female Resident Assistant of the Year.

Q. What was the greatest lesson you learned from your education?

The greatest lesson I learned from my time at college was that time management is A MUST. You might not think you have the time to juggle your classes, school projects, extracurricular activities, and social life, but it can be done with good time management. Always try to find a way to make time for your friends and some fun, even if it’s just for an hour or so. If you have some downtime to enjoy yourself, you’ll feel grounded and less stressed.

Q. What was the biggest challenge of being an RA?

For me, the biggest challenge of being an RA, at least at first, was the amount of public speaking it involved. I had to lead monthly meetings with my floor members to let them know about any policy changes, upcoming inspections, event plans, and general safety tips.

Q. How did you become more outgoing and when did you really notice a change?

Being president of my residence hall’s community council meant that I had to work with and lead my other council members, most of whom I had never spoken to before. By being around them every week and by hosting monthly programs for the residents in my community, I was a lot more visible. I interacted with many of the people in the two neighboring residence halls that made up our community.

I first noticed the change in myself about halfway through that year. During a Residence Hall Association meeting, we were asked to share some of our successes within our campus communities. I had volunteered to help with many more campus-wide projects than I had realized or expected. I had become comfortable with speaking up and joining in on projects with people I didn’t know all that well.

Q. What did you want your residents to know about you?

As an RA, I wanted my residents to know that I was there for them if they needed my help on anything or just wanted to hang out. The first thing I did was create a “status” board for my door so that the residents would know when and where to find me.

Because of training and orientation, I arrived earlier than the residents did. When move-in day came around, I kept my door open so that they could peek in and say hello if they wished. Some of them did, and they were glad for the opportunity to meet me informally before our floor meeting at the end of the weekend.

After move-in, I tried to be as available as possible. If I wasn’t in my room, I was at the front desk or in the common area, where I could more easily address issues as they occurred.

Q. Seeing your residents as an RA and seeing them as students must have been strange at times. Were there any times you struggled to distinguish between being a fellow student and their supervisor?

Being an RA can be a round-the-clock job, but it was easy for me to be an RA and fellow student at the same time. I was fortunate enough to have residents that knew to follow policy when I was around and not break the rules intentionally in my presence. I had no issue hanging out with residents and becoming friends with them outside of my RA duties.

The way that the RA position worked for me was that I was always “on-call” if a resident needed me or if an incident occurred that required my attention. Other than that, the only times I was strictly on duty were when I did my weekly patrols in the evenings and when my RA team was running a program in the hall’s common area.

Q. Looking back, what is your favorite memory of college?

My favorite part of my college experience was the year that I got to serve as my hall’s community council president, even though it wasn’t what I had originally planned on doing. I had a lot of fun working with the rest of the council to set up events, including the annual spring crawfish boil hosted by the Residence Hall Association.