As Aaron Mayer’s graduation approached, the traditional route straight from high school to college did not appeal to him. Instead, he took a gap year. His school, the Abraham Joshua Heschel High School, helped him find a program: Kivunim, based in Israel, allows young intellectuals to gain an understanding of Jewish culture and develop a sense of “world-consciousness.” Through the program, Aaron experienced different ways of life, met artists and philosophers, and furthered his respect for social responsibility.

After the year ended, he studied at Baruch College of the City University of New York, where he was one of three philosophy majors. In January of 2016, he transferred to Brown University, which has a distinguished philosophy department.

Q. Where are you from?

I’m originally from Westchester, New York, but after I moved to NYC, I just say that I’m from the city. Keeps things simpler. 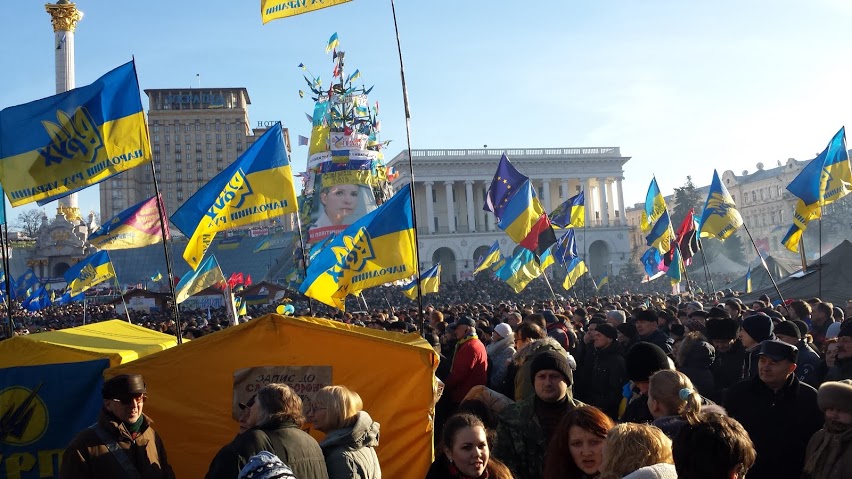 "When my buddy and I went to Kiev's central square on an eight-hour layover and saw tens of thousands of protesters. This was taken about 2 weeks before the Russian crackdown when Westerners started hearing about Ukraine." (Aaron Mayer)

Q. Why did you decide to take a gap year?

So, so many reasons, the first and foremost being that there’s really no other time to do it! When I was 18, I didn’t have a job to run off to, a spouse or children to take care of, a mortgage or a cell phone bill to pay; would all of that be true after I graduated from college? Maybe, but I wasn’t about to risk it. Eighteen is a ripe and formative age to take the helm on an unconventional journey, and that’s exactly what I did!

Q. Where did you go?

Greece, Bulgaria, Macedonia, Morocco, India, Jordan, Germany, the Czech Republic, Hungary, Spain, and Turkey, but we were based in Jerusalem.

So much! We studied Jewish civilization through the lenses of the different regions we explored. Judaism is a really unique historical culture that spread across continents and ethnic boundaries. To see how it adopted, rejected, assimilated, incorporated, or otherwise changed depending on its host was immensely fascinating. We saw how Jewish temples were constructed to resemble mosques in Spain, how Indian Jews spoke a Hindi-Hebraic language that they created themselves over generations, and how Jewish folk music was influenced by the Balkan rhythms as Jews migrated up the Rhine and settled in Eastern Europe. We visited museums, cemeteries, thriving Jewish communities, decaying Jewish communities, historic architectural sights, and humble synagogues in barns sheds, all with the purpose of understanding Judaism as a fluid and richly diverse culture that has adapted—and will continue to adapt—as the world changes.

But perhaps most importantly, I got a second family. There were 51 of us on the program from all over the world, and we became closer than the closest of friends. Believe me—when you’re lucky enough to be stuck with the same people in an airport or trapped on a bus in the middle of the Atlas Mountains in Morocco for 14 hours, those bonds tend to fortify.

Q. What was the intention of the program?

The mission of the program is threefold: to build world consciousness about the historicity of the Jewish people; to develop a comprehensive, cautious, complex understanding of the Israeli-Palestinian conflict; and to instill a sense of social justice and universalist responsibility. While in Jerusalem, we took classes such as Arabic, Hebrew, Perspectives of the Middle East, and Ancient Civilizations that were accredited through the Oxford Centre for Hebrew and Jewish Studies. We also volunteered twice a week at local organizations that have strong commitments to social action. I served in a soup kitchen, for instance, and I met many elderly Slavic Jews who had fallen through the cracks of the social safety net and needed extra help. I felt like I was making a meaningful contribution, and it was one of the best aspects of the program. 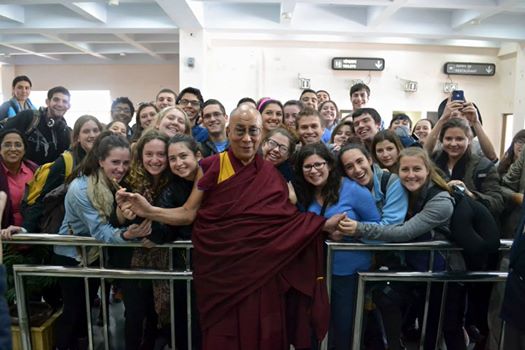 "When our group ran into the Dalai Lama at the (only) airport in Daramshala. I'm the tall one in the way back on the right!" (Aaron Mayer)

Q. What was your biggest challenge coming home and going to college?

This could be considered a problem, but I wouldn’t think of it as such: I feel very detached from the students involved in Middle Eastern politics. On many college campuses, Students for Justice in Palestine (which I support) and Hillel students for J Street (which I also support) find themselves in screaming matches with one another. This is so antithetical to the peace process that I disengage rather than muddy my hands by getting involved. I’ve been to Palestine, I’ve been to Israel, I’ve lived in the heart of the contentious Old City that has been shared by Jews and Muslims, and I’ve seen the hatred on both sides. With so many college students parroting misheard “facts” and shouting slogans at the other side, I am so privileged to have studied both narratives in tremendous depth with measured patience. I hope that I’ll be able to apply my thorough understanding of the conflict at some point, but I wouldn’t want to cheapen the experience by having my voice lost a din of hateful speech.

Q. What advice do you have for students interested in taking gap years?

The first piece of advice is simple: Do it! Seriously, this may be the only time in your life when you’ll be able to have time all for yourself, and everyone who takes a gap year loves it! Barring the numerous empirical studies that link gap years with increased social confidence during college, greater academic achievement, and higher job satisfaction rates compared to those who don’t take gap years, the simple act of taking the time to explore what you love or work in a field that interests you can be extraordinarily critical in determining the kind of person you want to be and the kind of life you want to lead. I certainly wouldn’t have gotten into Brown if it weren’t for the skills and experiences I gained while on my gap year, and I recommend it to everyone I can.

My second piece of advice is to research, research, research. Before deciding on Kivunim, I had scheduled a plan to attend a culinary school in Edinburgh for three months, study Capoeira in Brazil for three months, and intern at a think tank in DC for three months. You know what? That would’ve been great, too, because I had been the one to map it out. So often, people fall into the trap of doing what is expected of them: go to high school, go to college, get a job, get married, etc. Many will die without ever seizing command of their own fates. If you’re considering a gap year, you are fortunate enough to be on the precipice of a monumental turning point in your life. Choose wisely, and go boldly.