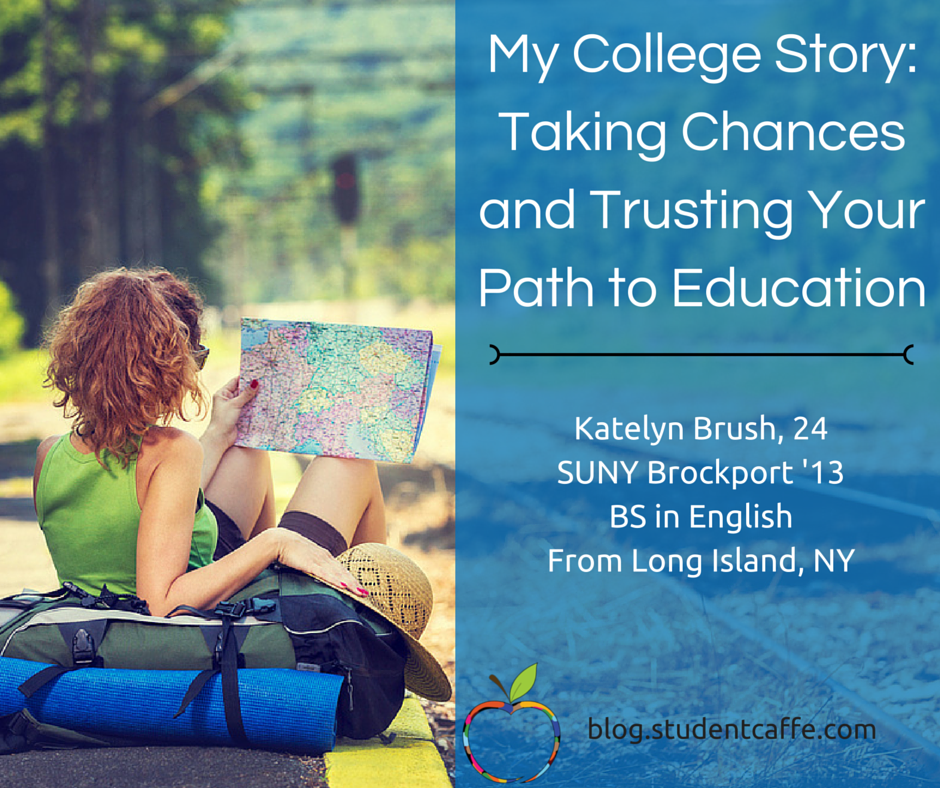 Katelyn Brush started her college experience at Suffolk County Community College but finished her degree at SUNY the College at Brockport. She graduated in 2013 with a bachelor's degree in English. While at SUNY Brockport, Katelyn studied abroad in England at the University of Oxford. Katelyn has written a children's book, teaches yoga, and currently works in social media for Student Caffé.

Q. What colleges did you go to?

I received my bachelor’s degree from SUNY the College at Brockport, but I earned some credits at Suffolk County Community College and the University of Oxford, where I studied abroad. When I first applied to Brockport, I was only accepted to begin in the spring semester. It seemed like a cruel joke initially but worked out well in the end. I spent my first semester of freshman year enjoying the company of my family and friends, working part-time to save money, and attending a community college full-time.

I had the stereotypical perspective of community college: I thought of it as just another form of high school. That was my first mistake. I felt like I didn’t need to try, so I barely passed my classes. My attendance only made it worse.

Looking back, I know community college is the real deal and well worth the commitment. Later on, I thought about taking on a second major, so I attended summer and winter classes there in between semesters at Brockport. Community college saved me a lot of money and made me a more determined student.

Q. Were you at all benefited by starting at Brockport later than anticipated?

I firmly believe that everything worked out for the best. When you transfer to a new college, your GPA is wiped out to 0.0. The credits from my community college transferred, but the grades did not. When I finally went to Brockport for my undergraduate degree, I was ready to take my education seriously. I did so well my first semester that the college sent me a letter with a personal invitation to study abroad at the University of Oxford. I knew it was a big deal, but when I found out that only one other student was invited, it seemed like a sign. That was when I first learned how to take chances—take smart chances, that is. Education and business are similar in that taking chances in an intelligent way might—or might not—catapult you into incredible achievement.

When I came back from Oxford, I was a different student. I started getting more involved in my college. I played in a soccer league, got an on-campus job, participated in open mike nights, and joined the English and newspaper clubs. Challenging courses now intrigued me, and I signed up for as many as I could. One was a J.R.R. Tolkien class (I’m a huge LOTR fan) that led to me acting in a play. I have terrible stage fright, so that was an adventure! Eventually, I interned as a reporter with The Saratoga Special. I chased down jockeys, owners, and trainers at the Saratoga Race Course for interviews.

Later, I was also inducted into the Sigma Tau Delta International English Honors Society where I presented my idea to write my first children’s book, Signing Together: A Guide to American Sign Language for Everyone. The publication raises awareness and donates to the Cornelia de Lange Syndrome Foundation while teaching families to communicate through a new language.

The nontraditional routes I took helped me personalize my education. They allowed me to strive for success and make a change in my life and in the lives of others. To this day, I’m very thankful for the opportunities.

Q. What were the drawbacks of starting at your four-year institution during the second semester of your freshman year?

I missed out on a lot of the events for freshmen. That meant that everyone already knew each other by the time I got to campus. Growing up, I had always been an introvert, so it was really intimidating for me to be the new girl.  In addition, my first friend was my roommate who was only a half hour from home. She wasn’t on campus much. My boyfriend was in the same dorm, so we stuck together (probably too much). That first semester was scary, but I eventually met friends and gained the confidence to join all kinds of new opportunities that made the experience special.

If you’re a transfer student, I highly suggest that you get involved. I felt very alone when I moved into Brockport, but I was able to feel comfortable and enjoy school as soon as I found places where I could connect with students who had similar hobbies.

Q. How did your semester at the University of Oxford change you as a student?

This university across the pond does everything differently. The program changed my perspective on so many things and helped me grow into a stronger student.

Professors are more like tutors who guide you to create your own classes and assignments. I met with mine one on one in locations all over the city: cafés, libraries, campuses, homes, and even an art museum in London. It was motivating to take responsibility for learning.

I think anyone who goes to college should be excited to learn, but sometimes we just do it because it’s a societal norm. Oxford ignited my excitement for education. Clubs and new classes looked more like fun adventures to explore than résumé builders. Everything was different, even the way I took notes and the way I thought. I went from being the student who felt like a failure for barely passing classes at a community college to the student who succeeded, enjoyed learning, and thought critically. Most importantly, I became more comfortable with my own decisions and direction.

Q. What was the greatest lesson you learned at Oxford?

Stay curious. Keep an open mind. The day you decide you’re no longer a student is the day you stop growing. Even now, as a part-time yoga teacher, I still consider myself a student. If I didn’t, I’d be limiting my growth.

Also, learning is fun. Choosing to educate yourself is fuel for the fire. It builds passion, and passion, in turn, creates success. I learned sign language for the fun of it, and it inspired me to write and illustrate a book that has donated hundreds of dollars to an incredible foundation. Education is a gift, so treat yourself!

Q. What was the greatest lesson you learned from your education as a whole?

Everything happens for a reason. Consider every opportunity that presents itself to you. Whether it be a job offer, a new friend, love, travel, or eating a type of cake you’ve never indulged in before, take the chance.

What my story amounts to is that if I had gone to SUNY Brockport from the start, I wouldn’t have experienced community college, which was great! It motivated me to study and get good grades, which later made me a candidate for the Oxford Scholar Program. Deciding to go to Oxford opened my eyes to the world and to what I wanted to do within it.

Years later, these were the things that I told Mr. Gervais, founder of Student Caffé, when he asked me what I had achieved and what I wanted to do for a career. He was impressed by this, not by my GPA, my internship, or my membership in college clubs. Not that those things were unimportant to him, but he most valued my determination to learn and take chances.

Higher education does not have a clear-cut path. All students should personalize their schooling to suit their needs. Education should make you happy. When it does, well, that’s true success.

Blog and social media administrator here at Student Caffé! When I graduated college I knew exactly what I wanted. My mind was running 100 mph toward entrepreneurship. I wanted to work remotely from my laptop to publish work that would change lives. Needless to say, I didn’t find that dream job for more than two years after graduation. In the meantime, I worked eight different jobs, one internship, and wrote a kid’s book.

I met the founder of Student Caffé, Randy Gervais, when I was waitressing in upstate New York. It was a chance encounter. His party was not meant to be seated in my section, but everything happens for a reason. It was obvious he was smart, successful, and genuinely interested in using his work to help others. We started talking, and he asked about my experiences and goals. Then, he offered me a job. Not just any job, but the exact kind that I had spent two years praying for. He said something along the lines of, “I’m working on a project. I can’t tell you much about it right now, but I would like for you to work with me.”

What’s funny about how this all started is that, at the time, I had no proof the business even existed. Something told me to trust that I wasn’t being played for the fool, so I did. Randy offered me a part-time job writing. Shortly after I began, he asked if I would join the team—two other employees at this time—on a business trip to New Orleans. Once again, regardless of the obvious fear of this all being too good to be true, I trusted. Soon, I was sitting around a table with these great minds, discussing future plans, full-time work, and more. From part-time to full-time writer to lead writer and now blog and social media administrator, I can say that trusting in this chance encounter has created more than just a job for me. I have learned and grown so much here. Better yet, I’m assisting in providing information that will help countless individuals pursue college degrees and achieve their dreams.

Q. What do you think is the key to finding your career after graduation?

It’s a daily struggle. It’s not like I just bought the ticket, took the ride, and am here cruising along on the Student Caffé train. I have to organize my schedule, prioritize, and push myself every day to put my best into everything that I do without burning myself out.

I would definitely say, “Trust your gut.” That was what stuck with me when I agreed to work for a business that I didn’t know much about. I had had a lot of other job offers that never felt right. The key is to believe in yourself, work hard, don’t give up, and follow your intuition. We are all much more powerful than we give ourselves credit for.

After you’ve been gifted with your dream job, know your limits and know how push past them. Practice self control and determination. Maintain a genuine passion. Work hard to keep that job and appreciate it every day because there are so many people who are still waiting to find their paths.