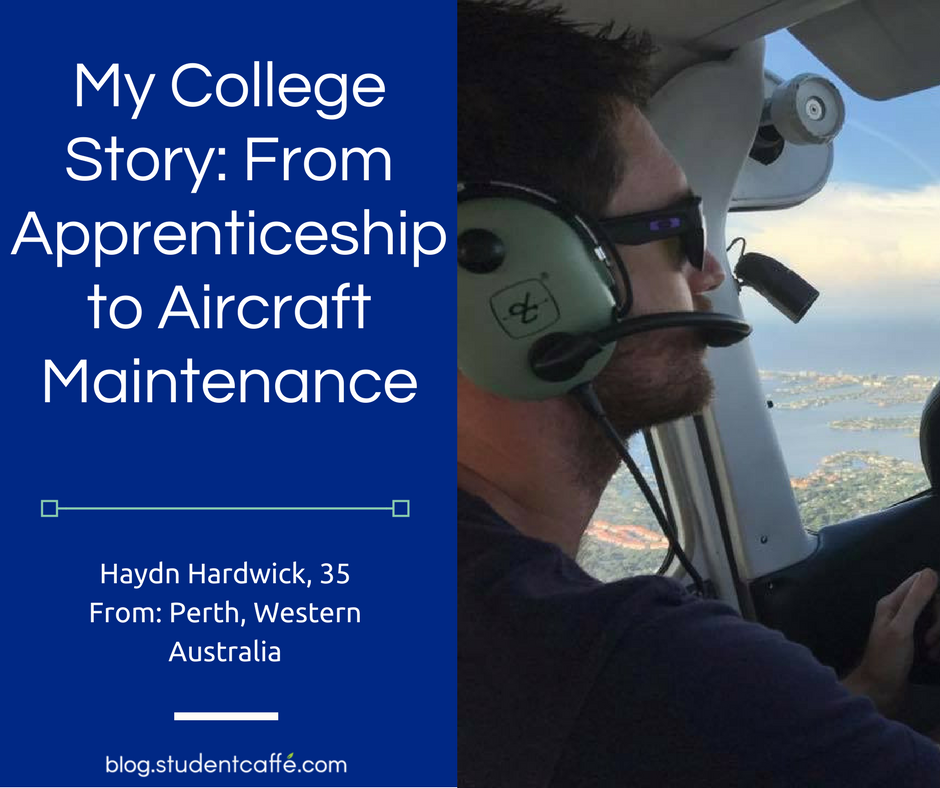 Haydn Hardwick grew up in Perth, Western Australia, but now lives and works in the United States. Unlike many of the other individuals we have interviewed as part of our My College Story series, Haydn didn’t attend a traditional four-year institution. In fact, he left high school early to pursue a career in avionics. He is now an aircraft maintenance engineer.

Q. You grew up in Western Australia. Can you tell us a little about your education there?

Back then, during high school, every kid would make a choice in year 10 [about whether] they wanted to go on to college or to pursue a vocation. The choice was usually made based on grades. The final two years of high school, students either picked subjects that would help them get into college or more practical subjects suited to vocational jobs, e.g., calculus vs. practical math.

Q. You didn’t finish high school. What influenced that decision?

I was offered an apprenticeship in the career I wanted to pursue. Not many apprenticeships were offered at the time, so I had to take the opportunity. (I was the only avionics apprentice in Western Australia for three years!) An apprenticeship is a four-years-guaranteed job where you are taught (on the job) how to do a particular trade. You start off being paid very little, but each year as you get better, your pay goes up accordingly. You can do an apprenticeship in many trades: plumbing, carpentry, electrical, hairdressing, mechanics, etc. I figured I could at least do the apprenticeship and then go on from there, either to college or further into the trade.

Q. Did you attend a trade school? Join the military?

I also joined the Australian Army Reserve when I was 17, which I did on weekends. I highly recommend part-time service to anyone! It can be hard work, but the Army taught me a lot. Plus it can also be a lot of fun!

Q. You now work in avionics. What path did you follow to get there?

Whilst still in school, I started to volunteer once a week at a couple of different aviation businesses. This gave me a good idea that the career I wanted to pursue was one that I enjoyed. From this experience, I was offered a four-year apprenticeship. At the completion of my apprenticeship, I obtained two trade certificates: Aircraft Maintenance Engineer-Avionics and Certificate IV in Aircraft Maintenance-Avionics. After another four years of working plus about 25 theory exams, I was fully qualified as a licensed aircraft maintenance engineer. Like in most professions, you never stop learning!

Q. How did you decide on avionics?

When I was a little kid, I used to mess around making circuits and pulling old electronics apart to see how they were made. I had wanted to just fix jet engines, but while I was doing my work experience, I discovered that I could fix airplane electronics for a job!

Q. What does your current job entail?

The main part of my job is designing and installing electronics upgrades for small aircraft. A customer will bring their airplane to me and I will remove all the old radios, navigation equipment, and autopilots, and install the latest touchscreen avionics, GPS navigators, and autopilot systems. It’s a bit like Pimp My Ride for airplanes!

Q. What is it like to live and work in the United States after having grown up in Australia?

Living here is very similar to Australia, [but] working is different in a few ways. Workers rights here are a lot less [substantial] than in Australia. [Employers offer] a minimum of four weeks of paid leave in Australia compared to two weeks here, and healthcare benefits don’t factor in when taking a new job. (Australia has a universal health care system supplemented with private insurance.) Australian employers are also generally open to the idea of [maintaining a] work-life balance; they want you to take earned time off. You won’t win any awards for working yourself to death.

Q. What advice do you have for students who don’t want to follow the “traditional” pathway through education?

Once you decide what you want to do, find someone who already does it and find out the best way to get started. Be proactive about finding a place to work. For example, go to a place of work and knock on doors to talk to the right people. Be prepared to take a pay cut in order to get your foot in the door.