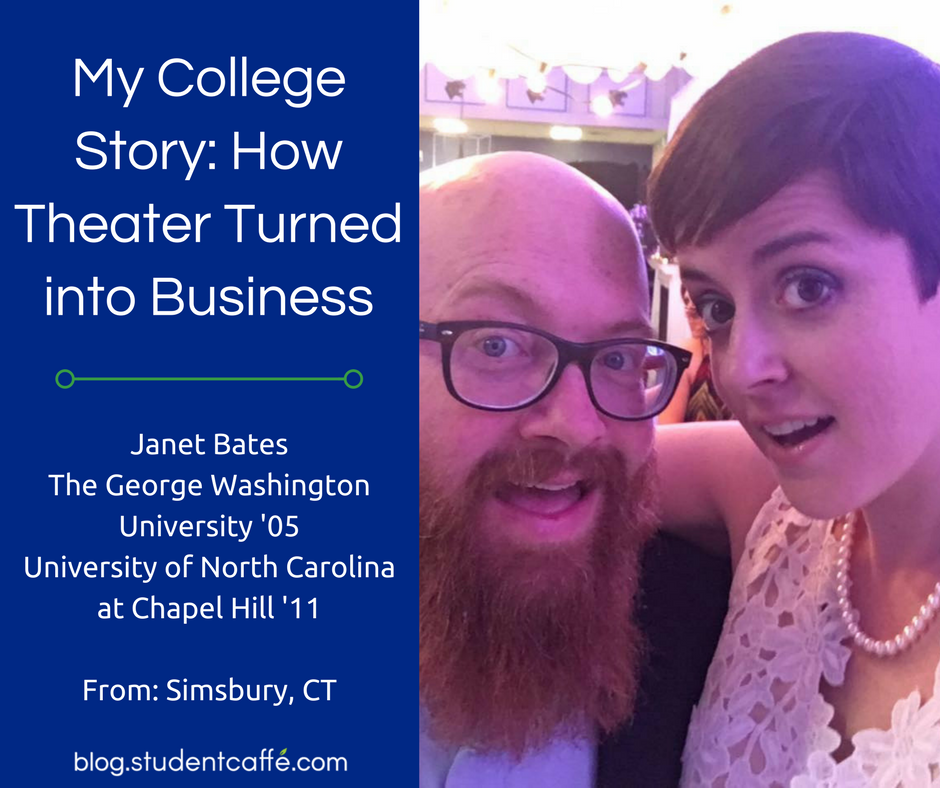 Janet Bates graduated from The George Washington University, a private institution in Washington D.C., with degrees in both theater and dramatic literature. Later, she decided to pursue a master’s in business administration from the University of North Carolina at Chapel Hill. Now, she works full time as the director of marketing for a construction company in South Carolina.

Q. Where did you grow up?

I grew up all over the place. We moved every three years or so and I lived in Michigan, Connecticut, Maine, and Singapore before moving to [Washington] D.C.. I had the benefit of living in a small town, a mid-sized suburb, and a big city before deciding where to go to college.

[Education-wise], I went to public school until sixth grade when I [began attending] an all-girls private school. I was one of four girls in the sixth grade and one of 21 girls in the whole middle school. The following year we moved to Singapore where I went to the Singapore American School. My sophomore year of high school I moved back to Connecticut while my family stayed in Singapore. I went to a private school that had both boarding and day students. I was a boarding student for one year and finished out my time in high school as a day student.

Q. Did you always know you were going to go to college?

I always knew I was going to go to college; it wasn’t really an option not to go. It was the expectation that my sister and I would attend a four-year school and ideally a graduate school later on. I knew that I wanted to study theater since I wanted to be an actor or singer.

Q. How did you choose your college? What made you choose that particular school?

I [originally] focused heavily on schools with very strong, intense theater programs. I applied and also had to audition for these schools. I did not get into [any of] these programs and had to change my search.

I found a lot of great schools with strong theater programs without an audition component and I started applying to those instead. George Washington fit me nicely. They were located in the heart of D.C., which satisfied my desire for a big city, but they also had a smaller campus in Georgetown where I would spend my freshman year—this helped me transition into college life.

My parents required that I double major if I was going to major in theater. I think they wanted me to major in business or education, but I chose dramatic literature as many of the classes were the same for both my majors. In hindsight this was not a very good idea. The broader class load and experiences would have made me more well-rounded and getting into business school later on would probably not have been as difficult.

Q. Did you have any pivotal experiences in college?

I was the executive director of the largest student theater group on campus, Generic Theatre Company. I learned so much about management, business, budgeting, marketing, and people through that experience. I credit it with feuling my desire to go into business.

[At one point] our budget was cut dramatically by the student association and we were given the opportunity to present our case to them in an effort to get it reinstated. We ended up winning our case and received the extra funds. If that had not happened, the theater company would look very different today and would not provide the wonderful programming and productions that it does. Through this experience I learned how much I enjoy fighting for something I care about, crafting an argument, and leading a group of people. This experience, along with my overall time as executive director, encouraged me to look into business as a career option later on.

Q. If you had to go back and do one thing in college differently, what would it be?

I would probably try harder in classes. I know that is a broad answer, but I passed with decent grades—not great grades—and I believe I would have learned more if I had tried harder and focused more.

[Furthermore, I didn’t study abroad.] I chose to spend four years in one place because [my family] moved around so much prior to college. In hindsight, I wish I had gone anyway!

Q. What is something you struggled with in college?

Time management. In high school, almost every hour of the day was scheduled for us. I went to school six days a week and knew exactly when to get my homework done, when to go to the gym, when to eat, when to sleep, [and] when to study. When I got to college, no one was telling me when to do those things and I really struggled with holding myself accountable and getting down to business.

Q. What is your current career?

I currently work as the director of marketing for a multifamily construction company. We build apartments throughout North and South Carolina.

Prior to going to business school, I worked for a branding agency prior and I loved helping companies create their story. [Then] I studied general management and sustainable enterprise while getting my MBA, so I knew I would probably go into marketing. I started with my current company as an MBA intern and joined full time after I graduated in 2011. I have been with them ever since.

Q. What's one piece of advice you have for people going into your field?

Don’t stop learning. You don’t know what you don’t know and you should jump at every chance to learn that is thrown at you. This doesn’t mean you need to go back to school. Audit online courses through programs like Coursera or go to Chamber of Commerce events or programs put on by your local American Marketing Association chapter.