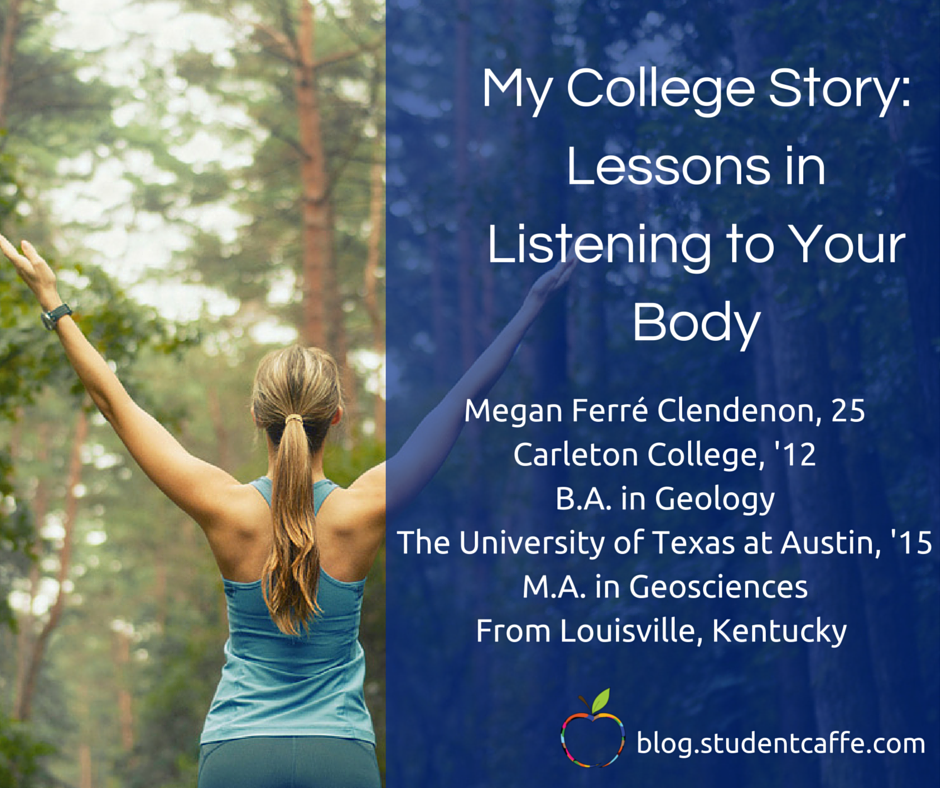 Megan Clendenon left her home in Louisville, KY, for cold and snowy Northfield, MN, to pursue her undergraduate degree at Carleton College. She spent her first two years deciding what she wanted to major in before declaring geology as her major. After a bout of appendicitis and a summer job in Arizona, Megan graduated in 2012. She took a year off before returning to school for her master's degree at the University of Texas at Austin; she graduated in 2015 and now works for Student Caffé.

I’m currently the staff writer for Student Caffé, but following college, I worked as a ranger for the National Park Service in Wyoming, a waitress in a French restaurant, a TA for undergraduate geology students, a private tutor for students with learning disabilities, and a sales rep at Old Navy. It’s been a long road.

Being able to work from home for Student Caffé is incredible. My husband was honorably discharged from the military, and we just moved from Killeen, Texas to Alexandria, Virginia. Because I work remotely, I’ve been able to maintain my job during this transition. Additionally, I’ve always been drawn to anything with an educational aspect—both my parents teach at the university level, so it’s basically in my blood.

I held an internship the summer between my junior and senior years. I moved to Biosphere 2 in Arizona with nine other students, and we worked on geology-related projects. Mine was about dirt, and how when it rains, microscopic mountains and valleys form in the dirt before it all smoothes out. It sounds boring now, and there was a lot of data crunching involved, but I got a senior thesis out of it, which helped me get accepted to UT. I also made some good friends and got to live in a different part of the country, so that was a great experience to have.

Q. What was the greatest lesson you learned from your education?

Not to get cocky, but I had a great GPA in high school and I’d always been one of the smart kids. I assumed it would always be that way, but going to a private liberal arts college means that EVERYONE is the smart kid. It’s humbling. When I got a terrible grade on the first English paper I ever wrote, I came down off my high horse really quickly. It took some getting used to, and I had to start working harder.

Q. What was your greatest challenge throughout college and how did you overcome it?

Right at midterms during my junior year, I self-diagnosed myself with appendicitis. Really classic symptoms. Like any 19-year-old, I called my dad and asked what to do. I had a chemistry midterm that day (not one of my best subjects) and I was feeling crappy, but dad said to try to take the test and then go to the school clinic afterwards. I walked into the exam—very nauseated—and told my professor that I might leave in the middle of the test to vomit. (I wanted to be upfront and I definitely didn’t want him to think I was cheating.) He told me, “Don’t be nervous.” In college, I was never angrier than in that moment. I took the test anyway, didn’t throw up, and went to the ER right afterwards. Two hours later, I was having emergency surgery. I think the lesson here is to trust your body.

Q. If you could give other college students any advice on health, what would you say?

Take your vitamins. Get outside on a regular basis, even if it’s just to walk to the grocery store. Eat lots of green leafy vegetables. My dad always tells me that I should be able to name at least five fruits and vegetables that I’ve eaten every day—he still sometimes asks me when we talk. It seems to be a good rule to live by. Oh, and drink lots of water.

Q. How did you balance your recovery from surgery and finishing the semester?

Luckily, my appendix didn’t rupture before the doctors took me back to the operating room, so they were able to take their time and do everything laparoscopically. I ended up with three inch-long incisions: one at my belly button, one at my left hip, and one at the top of my pelvis. That isn’t to say that it was fun, but recovery didn’t take as long as it could have if the circumstances had been different. Fortunately I had a long weekend to recover. I did have to ask my roommates to help me shower and walk up and down the stairs, but by the end of the next week, I was able to function on my own. My chemistry professor ended up giving me an A-. I’m pretty sure he felt guilty about doubting me when I told him I was sick; I’m not convinced I actually earned that grade.

Q. If you could go back, would you handle the situation differently?

I suppose, in the grand scheme of things, I would rather still have my appendix. That said, the summer after junior year, my roommate got appendicitis. I’d just experienced it firsthand and I recognized her symptoms, so I forced her to go to the hospital. There were complications during her surgery because we’d waited so long to get to the ER, but she came out fine after several hours. Life’s funny like that, huh? You get the experiences you need right when you need them.

Q. What advice do you have for students who are sick and have professors that don’t have sympathy for their situation?

I went to class when I was sick a lot. I had the flu during a mandatory geology camping trip. I sat through the first day of classes my senior year with a mild concussion and several facial lacerations (but that’s a story for another day). I presented my senior thesis to the department when I had a nasty cold. Unfortunately, sick happens. Teachers can either accept it or not, but unless you’re super contagious, I’d always recommend going to class. You can sit in the back and not talk to anyone. 99% of the time, the material is easier to learn when you experience the lesson firsthand. Obviously, you know your body best, and you also know which of your teachers are most likely to get cranky about absences. If you do skip class because you’re sick, make sure that you actually go to student health services so you can prove where you were. Doctors notes aren’t just for middle schoolers!

Q. What is your favorite memory of college?

One of my best friends in the world was my roommate both sophomore and senior years at Carleton. We played softball together. We declared our majors together. We slept in the geology department while writing our theses and ordered pizza straight to an academic building because we had no time to eat. We did everything together. People actually started to think we were a couple (we weren’t). We went to Australia together after graduation. She was in my wedding. So there’s not just one memory, but pretty much any memory with her in it is my favorite. I wouldn’t have met her if we hadn’t gone to Carleton together.