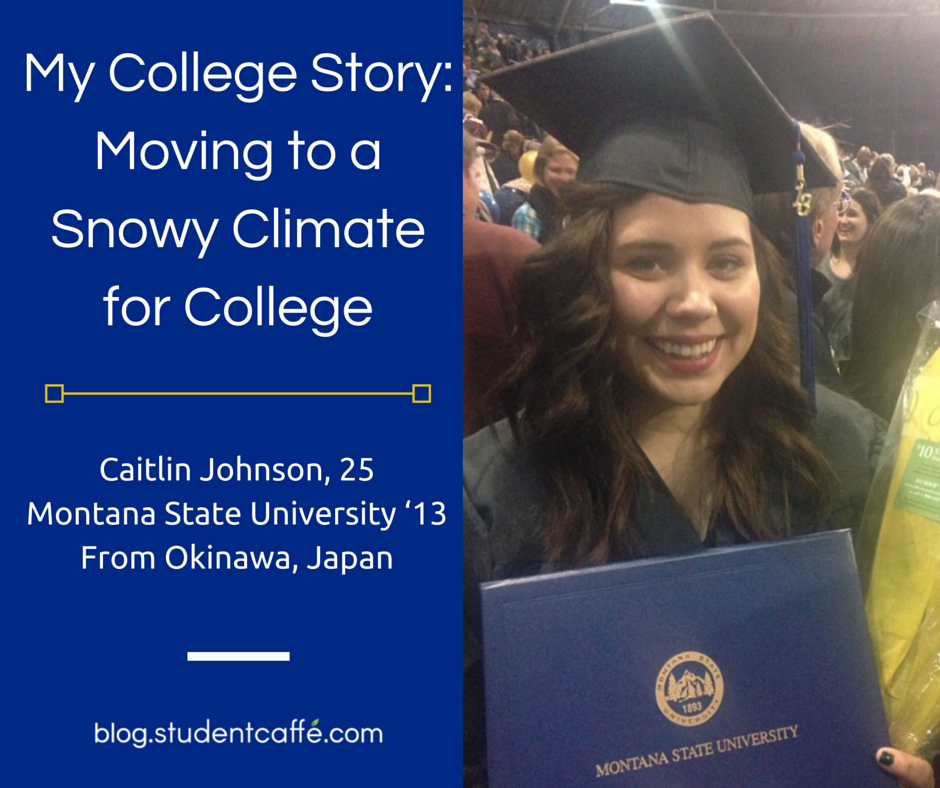 When Caitlin Johnson was accepted to Montana State University in Bozeman, she was living on a U.S. military base in Okinawa, Japan, where her parents were stationed as educators. She accepted her admissions offer and moved halfway around the world to study. The culture and climate were completely different—she went from experiencing typhoons in Japan to winter storms in Montana—but she adjusted and came to love Bozeman. Caitlin would go on to earn a bachelor’s degree in education, which she received in 2013.

Q. Why was a school in Montana on your short list?

I think I always knew I would end up going to school in Montana, though I did explore other options. I visited Montana every summer (my dad is a Montana Boy) and I fell in love with Bozeman. There was always something charmingly magical about being surrounded by mountains. I also didn’t know what I wanted to major in, and MSU had a lot of options to choose from (more than 200 programs!).

Q. Were you nervous to move across the world to attend college?

I was! Every time someone would ask me if I was excited to start school, I would smile and nod, but inside I was terrified. When you start new at a military high school, there’s a lot of support to help you transition. Starting college was like diving into a pool without testing the water first. To be honest, though, I’ve had a harder time adjusting to living in Massachusetts (where I moved after graduating) than I ever did in Montana. It’s like a different country, and that’s saying a lot coming from me.

Picking up the key to her freshman dorm (Caitlin Johnson)

Q. Though you’re American and you visited the United States every summer, you did spend most of your childhood abroad. Did you experience any culture shock that first full year you spent in the U.S.?

Living on a military base really submerges you in American culture, but there ended up being a few things I didn’t know anything about, mostly pop culture. However, that could have just been me personally since I usually prefer to read than do just about anything else. The hardest part of living in Montana was adjusting to the climate. Driving on icy roads is actually pretty difficult, especially after learning to drive on the opposite side of the road. And yes, I did accidentally turn down the wrong side of the road once (or twice).

Q. What are Montana winters like? Do you remember the first winter you spent there in college?

It snowed September 30 and didn’t stop until May. The first time snow fell from a tree and slid down the back of my coat was eye-opening. I think I bought three different kinds of coats that first year because in Montana you need multiple kinds of jackets, gloves, and boots. What you need to wear changes daily! It took at least four years for me to finally figure out what to wear and when. I also remember dragooning several boys from my dorm to help dig out my snow-buried car in exchange for tacos. Bozeman at Christmas was like living in a Norman Rockwell painting, or an old-fashioned carol. 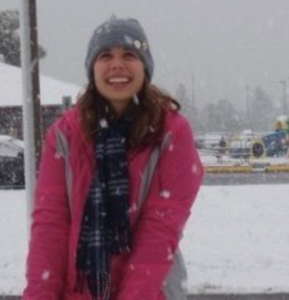 Q. What’s scarier: a typhoon or a blizzard?

That’s a hard question. In Japan we were usually prepared days ahead for a typhoon. Sometimes blizzards just appear out of nowhere in Montana. I think the aftermath of a blizzard is much worse: You can be stuck inside your house for a few days—or just use your four-wheel drive.

Q. You come from a family of teachers. Did that inspire you to study education at MSU and then make a career out of it?

It did! But I wish I had taken more time to explore other options. Education was an easy major for me; it was definitely the safe choice. I’m an awesome teacher, but I could have also made an awesome anthropologist. You never know until you try!

Caitlin playing in the snow with her husband (Caitlin Johnson)

I currently live outside of Boston, Massachusetts. I am a professional substitute teacher, which suits my lifestyle of impromptu adventures perfectly. I’ve taught everything from preschool to eighth grade, so when I do finally settle down, I’ll have a better idea of what grades I want to teach (kindergarten is out). An education degree is also more versatile than you would think.

So far winter in Bozeman is definitely worse. I didn’t even have to put snow tires on my car this year in Boston. I think I got off easy compared with last year’s “snowmageddon”. Hopefully next winter will be gentle with me too.

Coffee. A stack of library books. Cuddling with my dog. Avoiding snow in my boots as much as humanly possible.