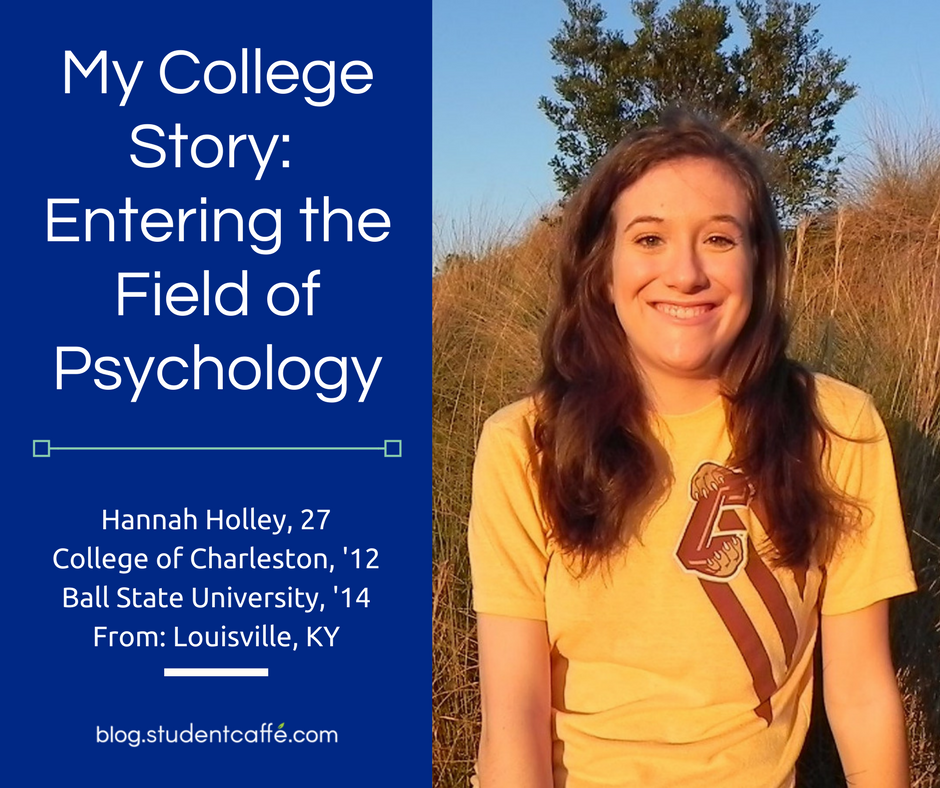 Hannah Holley has recently joined the Student Caffé team as a writer, but before embarking on this journey, she earned a bachelor’s degree in psychology from the College of Charleston, a master’s degree from Ball State University, and worked as a Board Certified Behavior Analyst in South Carolina.

Q. You went to high school in Kentucky. What made you go all the way to South Carolina for college?

I have an aunt who lives in the Charleston area, and we visited her in the summers when I was a kid, so I was already familiar with the area. But what it really came down to was the location! I visited a lot of campuses, but I got a gut feeling when I was at the College of Charleston. Its campus is situated right in the middle of historic downtown Charleston, and the scenery totally blew me away!

Q. How did you get into psychology? What made you declare it as your major?

So, funny story. I went to college hoping to be a marine biology major. I had done some sea turtle rescue volunteer work when we visited my aunt, and I thought that would be so fun to do as a job! Then I got to college, and realized that I was not good enough at math...so I started looking for a new plan. I took a Psychology 101 course and thought it was interesting, so I took some more psychology courses. I still wasn’t really sure what I was going to do for a career, though.

Q. What was your favorite thing about college?

I loved the independence! If I wanted to make my schedule so that I only had one class on Tuesdays and Thursdays, and it was at noon, I could do that. I could study when I wanted to, hang out with my friends when I wanted to, and eat whatever I wanted! It was glorious.

Q. Did you take a break between completing your undergraduate degree and starting your master’s program? Why or why not?

I did take a break, for about a year. I honestly wasn’t sure at first that I needed a master’s degree. I had started working as an Applied Behavior Analysis (ABA) therapist about a year into my undergraduate degree. By the time I earned my bachelor’s degree, I felt like I wanted to keep doing ABA. It was possible for me to [continue as an ABA therapist] without going to grad school. It was actually my mom who convinced me to go ahead and get the master’s degree. She said that it was easier to do it now since I hadn’t been out of school long, and would be harder to go back and do later. And she was right! (Thanks, Mom!)

Q. What does being an Applied Behavior Analysis (ABA) therapist entail?

So, Applied Behavior Analysis is really just a way of teaching—it focuses on changing the environment to change behaviors. In ABA, we look at chains of events (what happens right before and right after a behavior) in order to change the behavior. Individuals with autism often struggle with communication and social skills, so those were the behaviors that I taught frequently. For most people, we learn communication by [following] this chain of events: We want something → we ask for it → we get it. For individuals with autism, sometimes the chain gets messed up: We want something → we yell → parents give things so the yelling will stop. So our goal in ABA would be to change the chain of events to where parents wouldn’t give anything for yelling. Instead, only pointing to what [an individual] wants or using their sounds or words would [result in getting] that thing.

Q. You earned your master’s degree by completing classes online. What advice do you have for other students taking online classes?

It’s definitely a unique situation. For me, it worked because I was already working in the ABA field, and the next degree would just help me get a promotion. So I was already getting on-the-job training. I also had recently gotten married, my husband’s job was in Charleston, and there weren’t any ABA graduate programs nearby. It was great for my situation. But as far as advice—I don’t know that I would say that online courses are harder, but they’re very different. You have to be able to motivate yourself to complete the assigned readings, just like in traditional classes, but it can be hard to stay focused during the class meetings (usually done via webcam) because pets and TV are such fun distractions.

Q. How much time did you have to devote to your master’s program?

Luckily, I had already taken some classes to start the board certification process and those counted toward my master’s degree. I was able to take just one or two courses at a time and still finish the degree in a little over a year. Most courses were about three credit hours, so I typically had three to six credit hours going at a time. There was typically a one-hour “lecture” each week (where the professor put up a PowerPoint presentation and talked about material), plus a couple of hours worth of information to read, and then preparation for papers and/or tests. So pretty easily three or more hours worth of work per class each week.

Q. What did you do as a Board Certified Behavior Analyst (BCBA)? How was this different from what you were doing as an ABA therapist?

I worked with children who had been diagnosed with autism (and sometimes other disorders) to help them function better in their environment (home, daycare, etc.). We most frequently taught communication skills (verbal, sign language, or picture cards), social skills, and play skills. ABA is really focused on rewarding the behaviors you want to see more of, which can be a challenge for individuals with autism. Often, people with autism have limited interests, and they’re not always things that would make sense to other people.

For example, I had a client once who would do just about anything to be able to crawl on top of a pool table at his house and push the balls around by himself, so we used that to teach him! He did not often use words to communicate what he wanted; he usually just yelled until someone figured it out. To encourage his social skills and interacting with others, we set it up to where he could “earn” a few minutes of playing on the pool table if he said “pool.” From there, we lengthened the phrase to “play pool,” and then “I want play pool.”

I started as an ABA therapist who worked directly with the children, implementing the programs that my supervisors wrote. When I earned my master’s degree, I had to prove that I had experience in ABA, and then I took a test to become a Board Certified Behavior Analyst. At that point, I became the one who was writing the programs that other people were teaching the clients. I also taught parents about autism and ways to encourage their childrens’ skills, and monitored client progress.

Q. How do you balance being a mom with everything else that is on your plate?

I’m not going to lie, it can be tricky! I ultimately decided to leave my career as a BCBA after my son was born, so my life has been focused on him. It’s easy to lose your sense of self when raising a toddler, but now that he’s older, he can entertain himself for a little while. So that helps!