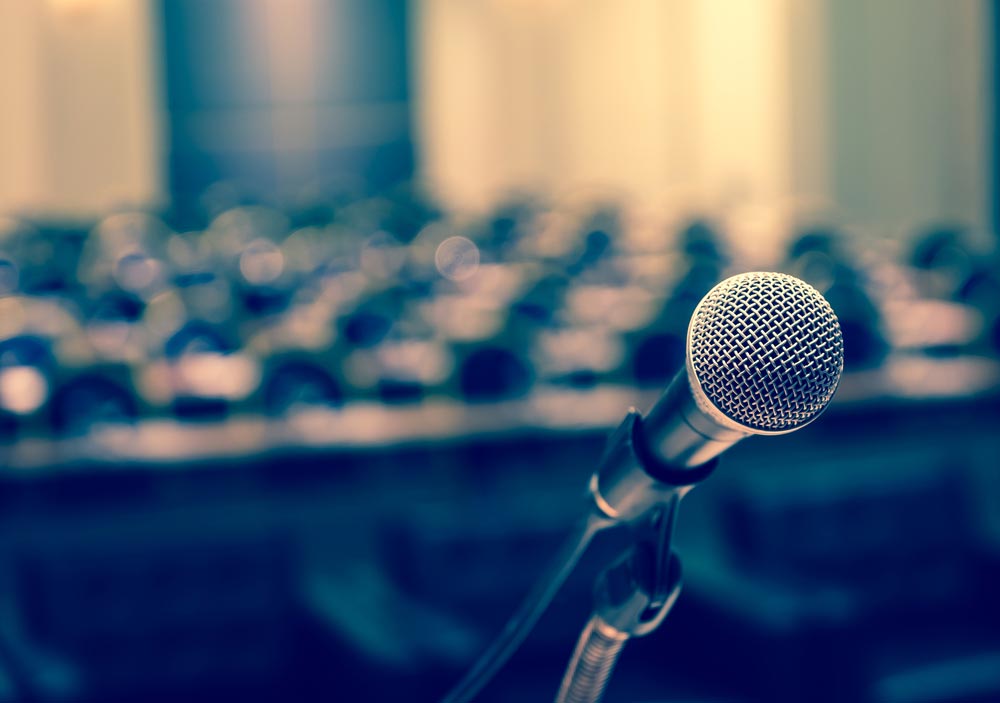 When I was a senior in high school, I took a public speaking class. In it, we were all required to memorize a song by The Beatles and deliver it as a speech. Most of the class chose “Come Together,” which was arguably quite hard to deliver because the lyrics, when spoken, seem like a whole bunch of nonsense. I chose “A Day in the Life,” because it read more like the morning news than a song, but it was still a tricky assignment. Everyone struggled to present their works, mostly because we knew the material in song form, and making it into an interesting speech using only our intonation and gestures felt impossible. That was probably the idea of the whole project, but it also got us to lighten up. You can’t not crack a smile when the fifth person in a row says, “He got walrus gumboot.”

We needed to have an exercise that helped us get over our fears of public speaking because those fears are very real, and they can be debilitating. Fear of public speaking is a self-fulfilling prophecy: The fear makes you freeze or fumble your words or forget to speak up. The failure leads to a heightened fear, because you’ve already experienced that lack of ability. The heightened fear, in turn, ups the chances that you’re going to freeze again. Maybe at this point you just avoid public speaking like the plague. It’s doable to a point, but between college presentations, work presentations, and wedding toasts, you’re bound to have to do some public speaking in the future.

So sure, presentations alone give you a decent reason to learn public speaking, but are there any other benefits?

You’ll develop critical thinking skills. Generally speaking, there are two types of speeches: persuasive speeches and informative speeches. In persuasive speeches, you have to argue a point and try to convince the audience to take your side. In informative speeches, you need to get your point across about a certain topic, whether it’s explaining a science experiment, teaching a lesson, or analyzing a piece of artwork. Regardless of the type of speech or presentation you’re making, you have to think about how best to relay information. Do you come straight out with an argument? Do you talk about potential consequences? Making a speech both effective and interesting takes practice and critical thinking.

You’ll better your research skills. This one is easy. You can’t just stand up in front of a group of people and talk about something you know nothing about. Well… you could, but I certainly wouldn’t recommend it. When you’re well versed in a particular subject, it’s easier to talk about. You’re less likely to freeze if you’re confident that you know your speech like the back of your hand. Researching your topic and brainstorming potential questions beforehand will result in a better presentation, period.

You’ll enhance your nonverbal communication skills. Everyone speaks with more than just their voice. The gestures and faces you make, even if you do it unconsciously, say something about you. When you use your body language to your advantage, it will engage your audience and make a good speech better. If it becomes distracting, though, because you gesticulate wildly, or play with your hair, your audience will start paying more attention to your actions than your message. A public speaking class will help you recognize your speaking habits and tailor them to the occasion.

You’ll learn to speak better. Yes, you’ve been speaking your entire life, but you probably have developed some quirks over time. Sometimes these are regional (saying “pop” instead of “soda”), but other times you may never have learned how to pronounce a word right in the first place. It wasn’t until I got to college that I learned that I don’t delineate between my i’s and my e’s (“pen” and “pin” sound the same to me), which was really confusing every time I asked my roommate if I could borrow a pen. When you take a public speaking class, your teacher and classmates will let you know what you sound like when speaking (sometimes you’ll even be recorded and have to watch yourself on camera—yikes!) and from there you can make changes to your speech patterns so that you come off as clear and intelligent. Enunciation and pronunciation are equally important when you’re speaking to an audience.

You’ll gain the power to influence and motivate people. If you talk well, and people listen to you, you’ll gain the power to change their minds. Whether you want to convince people to recycle, stop them from buying single-use water bottles, or invite them to participate in a neighborhood cleanup project, you have to be persuasive, informative, interesting, and passionate. Engaging the audience and making them react to your passion can result in behavioral changes. Just look at political candidates; the ones who can speak well gain more influence over their audiences than the ones who fumble through their talking points.

You’ll gain leadership skills. People follow those who can lead, and being able to communicate effectively and coherently makes you a better leader. Think about it, are you more willing and able to follow the instructions of someone who delivered them clearly or someone who gave you a vague idea of what you should be doing? Even if you’re not in a leadership position, showing your boss and your boss’ boss that you can speak effectively about a topic puts you on the short list for a promotion.

You’ll better your ability to think on the fly. After a speech or presentation, there is generally a time for the audience to ask questions. Sure, you can stock the audience with your friends and have them ask predetermined questions (guilty!), but you’re almost always going to be asked a question that you haven’t explicitly prepared for. If you know your topic, this shouldn’t be a problem, but you still have to be able to think quickly in order to give an intelligent response. When there’s a painful pause between the question that is asked and the answer that you give, people will begin to question your credibility. Even an answer like “That is a great question, but unfortunately the answer is outside of the scope of my research,” is better than silence or “I don’t know.”