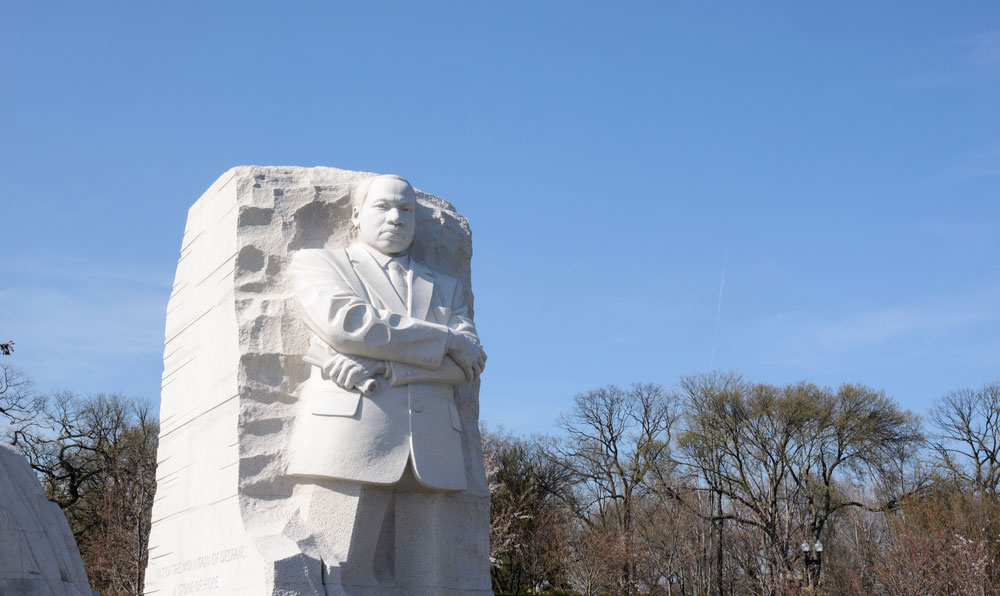 Who was Martin Luther King, Jr.?

Martin Luther King, Jr. was born in Atlanta, Georgia, on January 15, 1929, when segregation was a way of life in the United States. He was a member of the National Association for the Advancement of Colored People (NAACP), a Baptist minister, and a civil rights activist. He is known for his passionate, but peaceful, fight for racial equality and civil rights. He participated in the Montgomery Bus Boycott in 1955, helped create the Southern Christian Leadership Conference (a group that worked with black churches to organize nonviolent protests and civil disobedience in the fight for equality), gave his “I Have a Dream” speech at the March on Washington in 1963, and won the Nobel Peace Prize in 1964.

His life was tragically cut short when he was assassinated on April 4, 1968, in Memphis, Tennessee. One week after his death, Congress passed the Civil Rights Act of 1968 (also known as the Fair Housing Act), which prohibited discrimination on the basis of race, origin, or religion against tenants or home buyers. In 1977, King was posthumously awarded the Presidential Medal of Freedom by President Jimmy Carter. In 1983, President Ronald Reagan signed a bill to designate Martin Luther King Jr. Day a federal holiday to be observed on the third Monday of January each year, close to King’s birthday. In 2004, King was posthumously awarded the Congressional Gold Medal.

He attended segregated schools in Georgia while he was growing up, and then attended Morehouse College, where he graduated in 1948 with a bachelor’s degree in sociology. (Morehouse College is a private, liberal arts college located in Atlanta. Its student body is composed entirely of men, and it is a historically black college.) Following graduation, he studied at Crozer Theological Seminary in Upland, Pennsylvania, and graduated in 1951 with a Bachelor of Divinity. Having not attained his educational goals, he began graduate school at Boston University. He received his PhD in theology in 1955.

While in Boston, he met the woman who would become his wife, Coretta Scott. They were married in 1953 and remained married until his death in 1968. They had four children, three of whom still live today.

Martin Luther King, Jr. was a firm believer in nonviolent protest and civil disobedience as a way to affect legislation and bring about change. And it worked.

The Montgomery Bus Boycott, led by King, began in 1955 after Rosa Parks, a black woman, was arrested for refusing to give up her seat to a white man. For 381 days after her arrest, black residents of Montgomery refused to take buses, demanding first that they were given more dignity when riding the bus (being allowed to choose seats on a first-come, first-served basis, among other things), but then eventually demanding that the segregation laws be invalidated. In late 1956, the segregation laws were overturned.

The next year, King helped create and was elected president of the Southern Christian Leadership Conference. In this role, he organized marches; spoke publicly; planned protests; and published books, sermons, and articles. He advocated for desegregation and equal rights, namely, the right for black citizens to vote and for equal opportunity in housing and employment. At all times, King promoted nonviolence, even when others preferred violent confrontation, though he ended up being arrested many times during various protests and demonstrations. Change, though, was coming.

Protests and boycotts in Birmingham, Alabama, directed in part by King, led to shocking treatment of the protesters by the Birmingham Police Department. Peaceful protests were met with police dogs and high pressure water hoses. Much of the nation was shocked by the treatment of the protesters, but the resolve of black Americans was strengthened. King was arrested yet again but declined to call off the protesters. A letter he wrote in jail, “Letter from a Birmingham Jail,” defended his strategy of nonviolent protest and included the line “Injustice anywhere is a threat to justice everywhere.” In the spring of 1963, Birmingham officials agreed to begin desegregation.

There were members of the white community, however, who were against desegregation. In September of the same year, members of the Ku Klux Klan bombed the 16th Street Baptist Church in Birmingham, a prominent religious facility for the black community. Four young girls were killed, and over a dozen more people were injured. Violent protests erupted and public outrage grew. The next year, the Civil Rights Act of 1964, which ended segregation in public places and forbid discrimination in the workplace on the basis of race, color, religion, sex, or origin, was passed. In 1965, the Voting Rights Act, which prohibited discrimination on the basis of race and color in voting, was passed.

Martin Luther King, Jr.’s tireless fight for freedom and equality was directly related to the passing of these laws.

What about “I Have a Dream?”

King is perhaps best well known for giving what has become known as the “I Have a Dream” speech. It occurred in August, 1963, in Washington D.C., as part of the March on Washington. The march drew hundreds of thousands of people to the National Mall to protest inequality and demand equal opportunities and freedom for black Americans. Martin Luther King, Jr. was the last of the presenters to speak, and he spoke for 16 minutes, departing from his original speech to tell the crowd about his dream:

“I have a dream that one day this nation will rise up, live out the true meaning of its creed: ‘We hold these truths to be self-evident, that all men are created equal.’

I have a dream that my four little children will one day live in a nation where they will not be judged by the color of their skin, but by the content of their character. I have a dream…”

Why should I care about Martin Luther King, Jr. Day?

It’s important to reflect on the state of the nation and to understand that equality isn’t guaranteed yet. Martin Luther King, Jr. helped inspire the nation to make significant changes and to end segregation, which was a huge undertaking, and an important one. Yet over 50 years later, campaigns like Black Lives Matter, which fights against violence toward black individuals; Project One America, which advocates for LGBT+ equality in the southern United States; and HeforShe and Equality Now, which advocate for gender equality, are still working to make the world a better place.