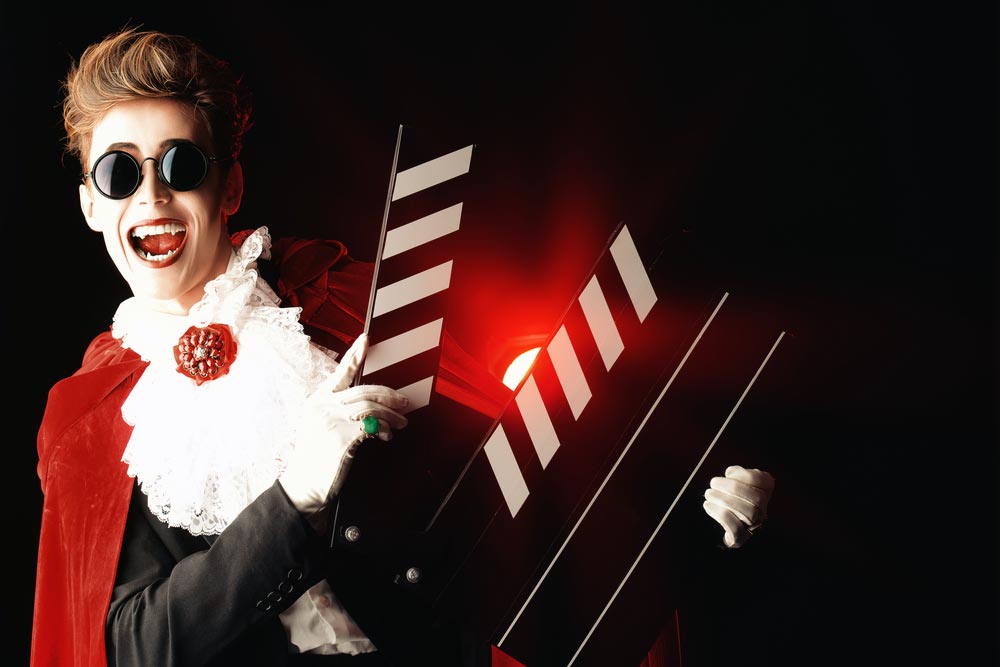 As much as I love every major holiday in its own way, each has its own identity: Thanksgiving and Christmas are focused on family, Valentine’s Day emphasizes romance, and New Year’s offers a fresh start. Halloween is one of the few holidays that puts an emphasis on fun (and fear!). Whether you’re planning to have friends over for a big Halloween party, or wanting last-minute ideas for a low-key night, this list of funny, spooky, and downright scary movies has something for everyone!

If you want to feel like a kid again…

Beetlejuice: Alright, so this movie isn’t really scary, per se, but I find it a little unsettling. The biggest thing you need to know is that it’s directed by Tim Burton. In fact, the make-up and set design have ‘Tim Burton’ written all over them. The storyline goes that a couple (Geena Davis and Alec Baldwin) living in a small town suddenly die, but continue living in their house as ghosts. A new family buys the house, and begins renovating the home; the ghosts don’t like this, and try to scare the new family out with the help of Beetlejuice (Michael Keaton). If you’re a Tim Burton fan and haven’t seen this, it should be at the top of your list.

Halloweentown: IMDb describes the plot, saying: “After learning she is a witch, a girl helps save a town full of other supernatural creatures,” which really sums up the movie perfectly. The storyline is fine, and the makeup and costumes are interesting, but the real fun in this movie is the nostalgia of having watched it many years in a row around Halloween on the Disney Channel. If you’re looking for a lighthearted throwback film, this won’t disappoint.

Hocus Pocus: This 1993 Disney classic set in modern-day Salem, Massachusetts, takes place on Halloween night when a teenage boy unwittingly brings a trio of witches back to life. The boy, his little sister, and a friend have to work together (with a talking cat!) to save the town. Although occasionally a little spooky, this movie is mostly dramatic and funny. If you’re looking for festive entertainment that makes you feel like a kid again, this is a great choice!

Ghostbusters: Although you really should never need an excuse to watch this iconic 1984 film, if you’ve been looking for a reason, then Halloween is it. A trio of friends (Bill Murray, Dan Aykroyd, and Harold Ramis) with an interest in the supernatural, leave their day jobs to hunt spirits around New York City. Sigourney Weaver and Rick Moranis also play major roles. Plus, the theme song is really catchy and there’s a giant marshmallow man. What more could you want?

If you want a little scary, but not terrifying…

A Nightmare on Elm Street: Also released in 1984, this scary flick directed by Wes Craven marked the introduction of Freddy Krueger, a villain who shows up in teenagers’ dreams and kills them. Although it has scary moments, this one isn’t so terrifying that you lose sleep yourself.

Sleepy Hollow: This period piece (set in 1799) is based on the legend of Sleepy Hollow, and features Johnny Depp, Christina Ricci, and Christopher Walken. Although it’s directed by Tim Burton, this film is not nearly as Burton-esque as some of his others. Ichabod Crane (Depp) is sent to Sleepy Hollow to investigate several recent decapitations. The story includes the Headless Horseman, who is the perfect Halloween character.

Zombieland: Released in 2009, this post-apocalyptic zombie flick manages to be equal parts comedy and horror in a way that few movies can. The main cast includes Jesse Eisenberg, Woody Harrelson, Emma Stone, and Abigail Breslin, plus a supporting cast which includes Amber Heard. I watched this for the first time on Halloween 2014, not knowing anything about it. Since then, it’s become a year-round favorite. In fact, the ‘Rules for Surviving Zombieland’ have become a running joke in my house. You’ll enjoy it.

If you want seriously scary…

10 Cloverfield Lane: This is my favorite out of the Cloverfield universe, with John Goodman acting as an “is he or isn’t he?” bad guy. While suspenseful, this movie is also full of twists and turns to keep you on the edge of your seat. If you’re looking for a psychological thriller with a unique premise and ending, this is a great choice!

Paranormal Activity. If you’re looking for a genuinely scary watch, this movie fits the bill. I saw it in theaters, and it legitimately terrified me; I went home and watched Finding Nemo so I could fall asleep. Using the “found-footage” premise (similar to the movie The Blair Witch Project), the movie is centered around a couple who are dealing with strange paranormal events in their home. Because it is filmed as though it was made from footage the couple filmed themselves, it’s extra haunting. For those who are into the paranormal, unexplained, mysterious kind of scary, this one won’t let you down.

The Silence of the Lambs: I’ve seen this creepy 1991 classic many times but it still gives me chills down my spine. While in prison himself, Dr. Hannibal Lecter (Anthony Hopkins) squares off against FBI Agent Clarice Starling (Jodie Foster) as she tries to gain information from him that would help solve a recent spate of serial murders. This is one of those movies that you won’t ever forget after you watch it: suspenseful, smart, and full of unique unsettling details. Let’s just say I’ll never forget the lotion scene, or Buffalo Bill standing in front of the mirror.

Now that you know some of ours, what’s your favorite Halloween movie?