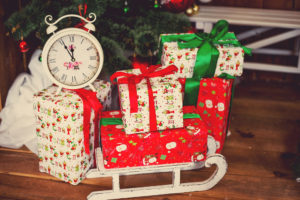 As you saw in our earlier post, there are tons of holidays that are celebrated in December, but arguably the main three are Hanukkah, Christmas, and Kwanzaa. This year, Hanukkah begins on December 24 and lasts until January 1, Christmas (like always) falls on December 25, and Kwanzaa begins December 26 and lasts through January 1. In the United States, there is a lot of overlap between these holidays; families in which one parent is Jewish and one is Christian may celebrate both Hanukkah and Christmas, and African American families may celebrate both Kwanzaa and Christmas. When I was growing up, my family always spent one of the nights of Hanukkah with family friends, and then they would come join us on Christmas. I particularly liked all the extra presents I received, and the latkes. 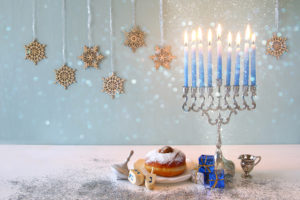 Hanukkah is an eight-day festival of lights, the dates for which shift slightly every year since the Hebrew calendar and the Gregorian calendar do not exactly align. Hanukkah begins on December 24 this year. Thousands of years ago, a Syrian king wanted all of the Jews who were a part of his kingdom to drop their Jewish culture and follow Greek customs. As you might imagine, the Jews didn’t want to adopt Greek culture and decided to fight back against the Syrian king in defense of their religion and culture. During the rebellion, a Jewish temple was ransacked and the supply of oil contained within was destroyed, but the Jews won the rebellion and celebrated their victory for eight days. When they returned to the ransacked temple, they found one small jar of oil, which surprisingly burned for eight days. Hanukkah is an eight-day celebration because of the Jewish victory and the miracle of the oil.

Each day of Hanukkah, one additional candle in a menorah is lit, starting with one candle on the first day, and ending with all eight candles lit on the last day. Because Hanukkah is a miracle of oil, traditional Hanukkah foods include potato latkes (fried in oil), doughnuts, and other oily foods. Beef brisket often takes the place of the main course. Families often play a game with a dreidel (spinning toy that has a Hebrew character written on each side) and chocolate coins, which are a traditional holiday gift. While Hanukkah was not originally a holiday that required intense gift giving à la Christmas, families now may elect to give one gift (aside from chocolate coins) for each night of the celebration. 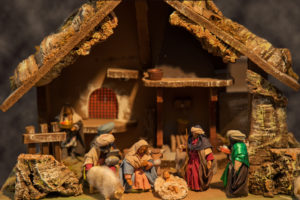 Christmas is celebrated each year on December 25 with gift giving, songs, and, traditionally, a turkey or ham for dinner. Festivities leading up to Christmas involve tree decorating, secret Santa, and cookie baking. While originally a Christian holiday, Christmas is now celebrated by over 90% of Americans, according to a recent survey. This includes over 80% of the people in the United States who don’t identify as Christian. It is now a holiday for the masses and has become quite the commercial phenomenon, with Christmas-specific sales beginning as early as Thanksgiving each year. But Christmas wasn’t always focused on pine trees, a green man whose heart grew three sizes, or Rudolph the Red-Nosed Reindeer, and it still isn’t completely. 62% of Americans attend a church service on Christmas Eve or Christmas Day.

The story starts with The Holy Bible. A young Mary was visited by an angel who told her that she had been chosen to be the mother of Jesus. She married a man named Joseph, who was at first confused and upset about Mary’s pregnancy; he too was visited by an angel (in a dream) who assured him that everything would be okay. Christmas, then, is a celebration of the birth of Jesus, who was born to the Virgin Mary in a manger in Bethlehem. He was visited by shepherds; wise men bearing gifts of gold, frankincense, and myrrh; and cared for by Mary and Joseph. Jesus, who was sent by God to free humans from their sins and allow them access to heaven, later died on a cross and was resurrected (at which point Christians celebrate Easter).

December 26 marks the first day of Kwanzaa, which also ends on January 1. Kwanzaa (which translates to “fruits first” from Swahili) is a seven-day holiday that is celebrated by African Americans and Africans throughout the world. Unlike Christmas and Hanukkah, Kwanzaa is not a religious holiday, but a cultural one. Established officially in 1966 by Maulana Karenga, Kwanzaa in the United States was initially associated with the Black Power movement. The holiday encourages the celebration of African heritage, gatherings between family and friends, and the reflection on seven African values (called the Seven Principles, or the Nguza Saba). The Seven Principles are unity, self-determination, collective work and responsibility, cooperative economics, purpose, creativity, and faith and are represented by seven candles in a kinara, or candelabra.

The kinara is filled with three red candles on the left side (these represent the struggle of the people, or self-determination, cooperative economics, and creativity), a black candle in the middle (representing the people, or unity), and three green candles on the left side (to represent the future, or collective work and responsibility, purpose, and faith). Each of the seven days of Kwanzaa is dedicated to one of the principles, and each day of Kwanzaa, one of the candles is lit, starting with the black candle, and then moving from left to right. On the final day of Kwanzaa, celebrators are encouraged to reflect on who they are, who they want to be, and what it means to be African.