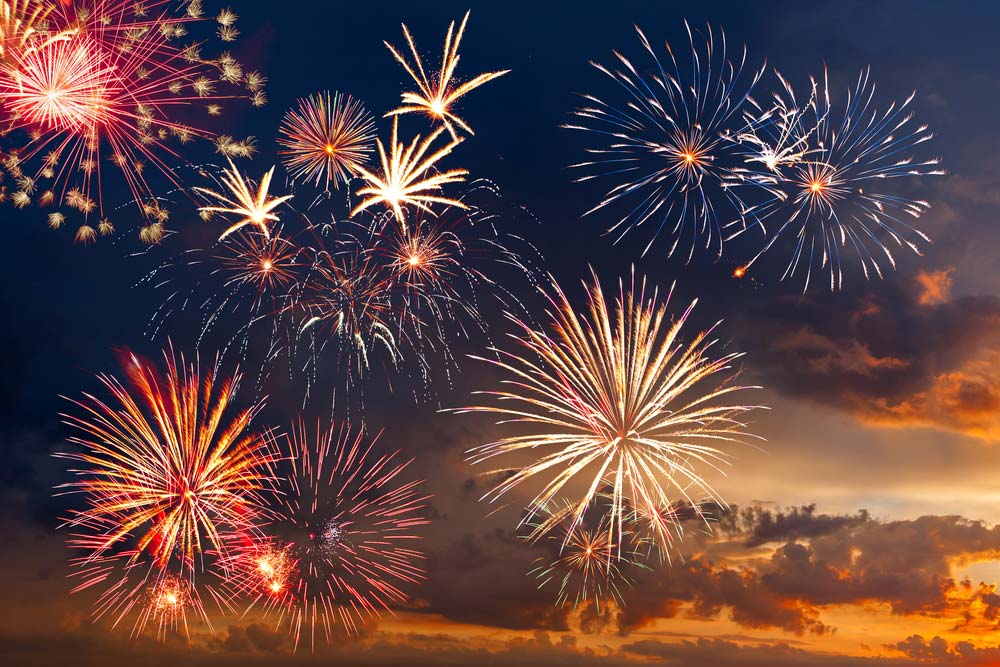 Whether you’re from a large city or small town, the Fourth of July is a big deal across the United States. Celebrations of Independence Day can range from simple backyard BBQs to multimillion-dollar fireworks displays. Since fireworks and festivities are an iconic part of American Independence Day culture, here’s a list of the biggest and best celebrations around the country!

Typically held in Centennial Park, the event is being moved to International Plaza this year because of renovations. The musical lineup includes After 7, Christian Jones, and Melvin Miller. Gates open one hour before the entertainment begins at 7:00 p.m. Listen to live music and stop by vendors for food and drinks before the fireworks show at 9:45 p.m.

Featuring musical guests such as Rachel Platten, Rhiannon Giddens, and the Indigo Girls, the concert begins at 8:00 p.m. and lasts until the fireworks show begins at 10:30 p.m., somewhat later than most of the other shows. The event will be broadcast nationwide on Bloomberg Television and televised online on bostonpopsjuly4th.org. The concert can also be heard over these radio stations. If you’re planning on going to see the show in person, gates open today at 9:00 a.m.

Those local to the Chicago area have a couple of events to choose from when it comes to celebrating Independence Day. The Grant Park Music Festival will be in Millennium Park from 6:30 p.m. to 8:45 p.m. and listeners can expect to hear patriotic favorites played by the Grant Park Orchestra. At 9:30 p.m., fireworks will light up the sky at Navy Pier. Both events are free!

There are multiple Independence Day-related events happening around Denver on the Fourth of July. If you’re the roller coaster or water slide type, visit Elitch Gardens Theme & Water Park during the day and stay for the fireworks show that starts at 9:00 p.m. MDT. At the Hudson Gardens & Event Center, Firefall will perform at 7:30 p.m. MDT (tickets are $22 for adults and $10 for children) and a fireworks show will follow the concert.

Featuring musical performances by artists including Lady Antebellum and Chris Janson, this local festival also includes food, kid-friendly activities, and fireworks! The event itself, including the Wyler's Light Family Fun Zone, is free, but food and beverage vendors will charge, so have some cash or your credit card handy!

With nearly 75,000 fireworks being fired off, this is hands down the biggest display in the country—and one of the most iconic! Although New Yorkers can watch the show live, fans around the country can watch from the comfort of their own homes on NBC. The two-hour show (including 25 minutes of fireworks) starts at 8:00 p.m., and includes performances by Blake Shelton and Kelly Clarkson.

This seven-day event features food, concerts, block parties, movie screenings, and a parade all leading up to fireworks on the Fourth of July. Also on the Fourth of July: free admission to the National Museum of Jewish American History, celebrations at Independence Hall, and musical performances by Pitbull and Heather Headley. If you’re not into the crowds, the concert and fireworks can be viewed locally on NBC10 or streamed from NBCPhiladelphia.com beginning at 7:00 p.m.

This event is free for general admission, but you can pay extra if you want to reserve your seat for the fireworks show. All day long, the festival will feature local bands (like Exapos and the Caspian Coberly Band), food vendors and exhibits, a kids entertainment area, and of course fireworks! Bands begin playing at 2:00 p.m. Check it out at Gas Works Park!

Taking place on the lawn of the U.S. Capitol, this show is hosted by John Stamos, and features musical acts by Jimmy Buffett, The Beach Boys, and The Temptations. A Capitol Fourth is broadcast on PBS starting at 8:00 p.m., and will be livestreamed on pbs.org, as well as on Facebook and YouTube. A fireworks show will follow the concert.

Check out San Diego for one of the biggest fireworks displays on the West Coast. Fireworks will be launched from four barges in the San Diego Bay at 9:00 p.m. The show is not broadcast nationwide, but those in both San Diego and Los Angeles can find it on local channels. If you’re interested in seeing the fireworks in person, you can watch from Coronado Ferry Landing, Harbor Island, North Embarcadero, Shelter Island, or, if you have a boat, the water.

No matter where you spend Independence Day, it’s always a good time! Do you have any Fourth of July traditions? Where is your favorite place to spend the holiday?